Angelina Jolie and the Illness No One Wants to Mention

Angelina Jolie and the Illness No One Wants to Mention May 15, 2013 Deacon Greg Kandra

Writer Jamie Calloway-Hanauer raises an issue many would prefer to overlook: 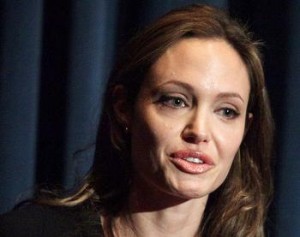 In the hours following the publication of Angelina Jolie’s story, others came forward with their own stories, and the media coverage since has been non-stop. However, when a similarly famous actress, Catherine Zeta Jones, came forward with her diagnosis of bipolar II disorder, it made only a news ripple compared to the crashing wave of coverage Jolie’s disclosure has received. Don’t get me wrong — Jolie’s announcement is hugely significant and part of a much-needed conversation. But mental illness should be afforded the same level of discourse. Perhaps talking about mental illness isn’t as fascinating as talking about an actress’s decision about her breasts, but talk about it we must — and unfortunately not even a courageous disclosure made by a beautiful and famous actress like Catherine Zeta Jones is enough to get that conversation started.

Someone in your family suffers from a mental illness. Someone in your congregation does as well. Someone among your neighbors, your friends, your co-workers. Maybe even your pastor. Since 26 percent of the population is plagued by mental illness, one would be hard pressed to convincingly claim to know no one who is mentally ill. Think about all the people you know, and then assume that 1 out of every 4 of those people has a mental illness.

But so far, despite the fact that mental illness is something that can and does affect anyone from any walk of life, any faith, and any socioeconomic status, it seems that the loudest voices among us have continued perpetuating stereotypes and myths. When we hear the media and the politicians and the pundits talk about creating a database of the mentally ill for public safety reasons, a culture of deranged boogeymen is created. Talking in broad strokes about “mental illness” fails to account for the spectrum of illnesses that are included under that term — including depression, anxiety, and eating disorders, among others. Even at the high end of the spectrum — the part the National Alliance of Mental Illness says includes major depression, schizophrenia, bipolar disorder, obsessive-compulsive disorder, panic disorder, PTSD, and borderline personality disorder — those who fall in these categories can have high-functioning, “normal” lives, with proper treatment….

…The mental health movement needs an everyday champion. I am neither a psychiatrist nor a theologian, but in my layperson’s opinion, I believe the search committee for this champion should look for someone to demonstrate mental illness is not a sin. Someone of faith who can convince us that, just like with any other illness, while prayer might help, in the majority of instances a doctor and medication will be needed. Someone with the emotional intelligence to convince us that mental health issues are not born of weakness. Someone with thick skin, for obvious reasons. And most importantly, someone who can gently remind us all that we are to love our neighbor, even if that neighbor is the boogeyman.

May 15, 2013
Come, Holy Spirit: Pope Releases Doves Presented to Him by Pilgrims
Next Post

May 15, 2013 Cardinal O'Brien Leaving Scotland for "Spiritual Renewal, Prayer and Penance"
Browse Our Archives
get the latest from
Catholic
Sign up for our newsletter
POPULAR AT PATHEOS Catholic
1