Benedict moves back to the Vatican tomorrow

Benedict moves back to the Vatican tomorrow May 1, 2013 Deacon Greg Kandra 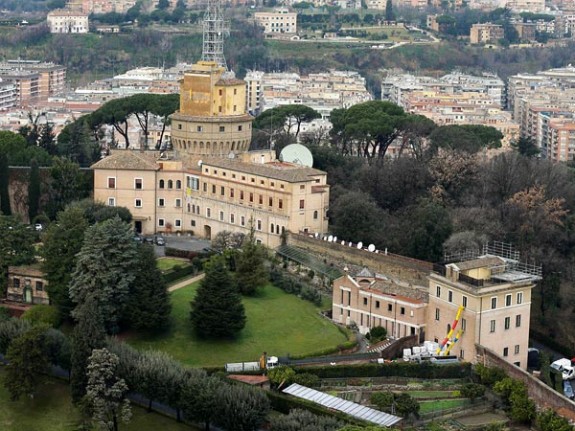 Break out the bubble wrap.

Retired Pope Benedict XVI is scheduled to move into a remodeled convent at the Vatican May 2, the Vatican spokesman said.

The spokesman, Jesuit Father Federico Lombardi, said Pope Benedict would arrive at the Vatican in the early evening by helicopter, “weather permitting.”

Pope Benedict has been living at the papal summer villa in Castel Gandolfo, south of Rome, since Feb. 28, the date his resignation took effect. Pope Francis traveled to the villa March 23 to talk, pray and eat lunch with the retired pope.

Father Lombardi said a group of Vatican officials would welcome Pope Benedict at the Vatican helipad, but he would not specify further.

Pope Benedict will live in the remodeled Mater Ecclesiae Monastery with Archbishop Georg Ganswein, his secretary, who also serves Pope Francis as prefect of the papal household; and with four laywomen who are consecrated members of the Memores Domini group, Father Lombardi said.

May 1, 2013 In a daring advertising move, JC Penney admits: we screwed up
Recent Comments
1 Comment | Leave a Comment
Browse Our Archives
get the latest from
Catholic
Sign up for our newsletter
POPULAR AT PATHEOS Catholic
1

Catholic Identity versus a Secularized Environment
A headline in the Angelus News on September 23, 2021 read: “Pope...
view all Catholic blogs
What Are Your Thoughts?leave a comment

One response to “Benedict moves back to the Vatican tomorrow”