Legion of Christ priest: “What God expects of me now is to care for my child and his mother” 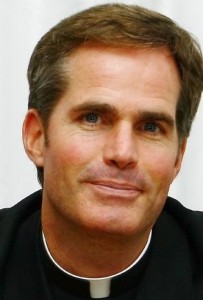 A prominent American priest of the Legion of Christ religious order has decided to leave the priesthood after admitting he fathered a child years ago.

The Legion said Saturday the Rev. Thomas Williams, a moral theologian, author, lecturer and television personality, had asked Pope Francis to be relieved of his celibacy and other priestly obligations. A friend, the Rev. John Connor, wrote in a Legion blog that Williams wanted to care for his son and the mother.

After Williams’ admission, the Legion’s then-superior acknowledged he had known for years about the child, yet allowed Williams to continue teaching and preaching morality. It was another blow to a congregation discredited by revelations that its founder was a pedophile who built a cult-like order which the Vatican is trying to reform.

Roughly a year ago, I heard the news that our brother Legionary Fr Thomas Williams LC fathered a child a number of years ago. As a result, Fr Thomas discontinued his public ministry and took a year for prayer and penance to discern his future course in the light of God’s plan.

Fr Thomas, after much prayerful reflection and discernment, has written to the Holy Father to request dispensation from the obligations of his ministry.

Such decisions are not easy. We all balance success and failure, joy and sorrow in our lives. None of us escapes sin and the need to ask forgiveness.

I have known Fr Thomas well for the better part of a decade. I have appreciated and enjoyed his friendship, his wisdom and counsel and I deeply respect his decision about his future. After recently finishing spiritual exercises he wrote me saying “I came to the serene conviction that what God expects of me now is to devote myself to caring for my child and his mother. By responsibly and lovingly accepting the consequences of my actions, I will continue to serve God and his Church. I know I should be with my son and try to be the kind of father he needs.”

I have complete confidence that Fr Thomas will continue to be a valuable instrument in God’s plan and positively influence many, many people for the good of Christ’s Kingdom. I hope all of you will join me in praying for the success of Fr Thomas in his new life.

May 12, 2013 Karaoke at the gas pump!
Browse Our Archives
Related posts from The Deacon's Bench