Frank Weathers has the scoop: 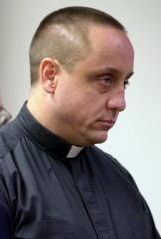 The Roman Catholic priest at the center of a public furor enveloping Newark Archbishop John J. Myers has resigned from ministry, a spokesman for the archdiocese said tonight.

The Rev. Michael Fugee, who attended youth retreats and heard confessions from minors in defiance of a lifetime ban on such behavior, submitted his request to leave ministry this afternoon, said the spokesman, Jim Goodness. Myers promptly accepted the resignation, Goodness said.

Fugee, 52, remains a priest but no longer has authority to say Mass, perform sacramental work or represent himself as an active priest, Goodness said. It was not immediately clear if Fugee or Myers would petition the Vatican to remove him from the priesthood altogether, a process known as laicization.

Asked if Myers had requested that Fugee step aside, Goodness said, “I only know that he offered to leave ministry and the archbishop accepted.”

May 2, 2013
Pentagon refutes reports of anti-Christian policies
Next Post

May 3, 2013 Theologian: “Allowing women to be deacons would create great confusion for the faithful…”
Recent Comments
1 Comment | Leave a Comment
Browse Our Archives
get the latest from
Catholic
Sign up for our newsletter
POPULAR AT PATHEOS Catholic
1

Listen to the Church, not LifeSite, when casting...
LifeSite News, the allegedly Catholic pro-life webpage, wants you to vote Republican...
view all Catholic blogs
What Are Your Thoughts?leave a comment