There aren’t a whole lot of priests in the Latin Church with two grown sons, but the Archdiocese of Seattle’s newest priest, Father Mark Kiszelewski, is one of those few. He was ordained to the priesthood June 8 by Archbishop J. Peter Sartain at St. James Cathedral. 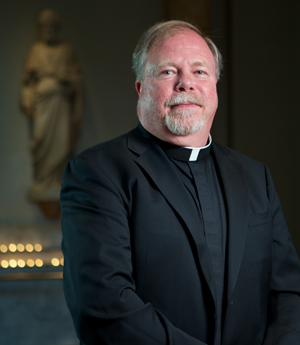 From an early age, Father Kiszelewski, now 58, felt a tug toward the priesthood, but his path to ordination was obviously not a direct one.

From seminary to ‘real world’

Growing up in Merrick, N.Y., he admired the priests at Cure of Ars Parish, where he also attended the parish school.

“I oftentimes got called out of the classroom to serve Masses and funerals and things,” he said. “There were a lot of good priests in my parish that were very holy men, and I think they gave good example to a number of us.”

But in the post-Vatican II ’70s, many seminarians were encouraged to “step back” and experience the “real world,” he said.

He decided to take some time off, and was soon enjoying the excitement of working and dating in New York City. But “I still thought that I would go back” to the seminary, he said.

He worked in paper sales, and job transfers took him to California, but he always planned to return to the seminary eventually — until he met the woman he would marry.

Father Kiszelewski got married in 1984 and had two sons, Alex and Andrew, now 24 and 21, respectively.

More job changes led his family to Seattle, where he worked as a financial adviser and became a member of St. Therese Parish. Eventually, his marriage ended in divorce, and he received an annulment in 2001.

His advocate in the annulment process was his pastor, Father Paul Magnano, now pastor of Christ Our Hope Parish.

“After the annulment was over, (Father Magnano) asked me, ‘So now what?’ And I said, ‘In my prayer, some things keep coming back up about serving the church in some form or another.’ And he said, ‘Well, keep praying about it,’ and I decided to pursue it further.”

Find out what happened next.

July 1, 2013 Picture of the Day—or Maybe of the Year, UPDATED
Browse Our Archives
get the latest from
Catholic
Sign up for our newsletter
POPULAR AT PATHEOS Catholic
1