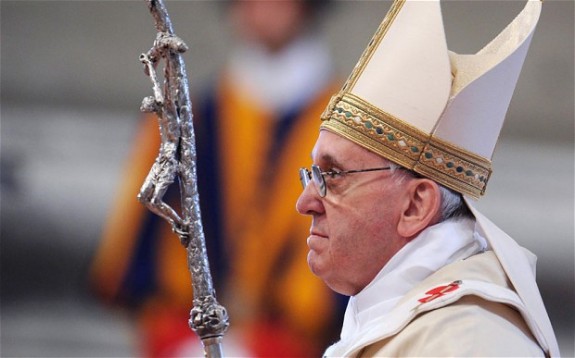 Religious freedom is talked about more than it is protected, Pope Francis said.

“The serious violations inflicted on this basic right are causes of serious concern,” and the world’s nations must act together to uphold “the intangible dignity of the human person against every attack,” he said.

The pope made his comments during an audience with Italian President Giorgio Napolitano at the Vatican June 8.

The pope said the cooperation that exists between church and state in Italy is built on the daily interaction and rapport between government officials and Catholics, whose main aim is always the promotion of “the interests of the people and society.”

He noted that 2013 marked the 1,700th anniversary of the Edict of Milan. This proclamation of tolerance of Christianity throughout the Roman Empire is seen by many, he said, “as a symbol of the first affirmation of the principle of religious freedom.”

However, today “religious freedom is more often declared than achieved,” the pope said.

June 10, 2013 A New Trend for "Unplugged" Weddings
Browse Our Archives
get the latest from
Catholic
Sign up for our newsletter
POPULAR AT PATHEOS Catholic
1