A New Trend for “Unplugged” Weddings 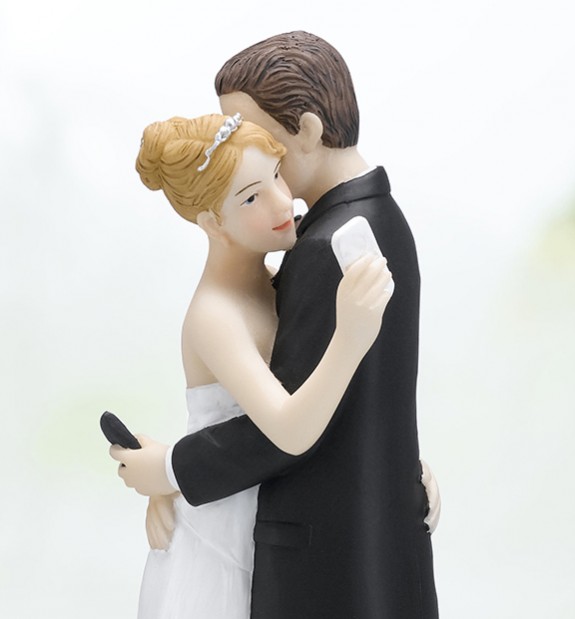 The attendant was stationed at the front door of my friend Michael’s wedding. “The ceremony is in the chapel,” she said to the arriving guests. “The ragtime band will be playing in the courtyard. The mini-cheeseburgers and lobster rolls will be served under the tent.

“Now, would you please hand over your cellphone?”

Attendees were taken aback. Four hours without my PDA? All evening with no Twitter feed? What happens if the baby sitter calls? The attendant smiled and said, “Perhaps you recall the announcement in the invitation?”

Michael, for the record, is not a celebrity, like the former National Basketball Association star Michael Jordan, who recently banned guests from bringing their cellphones and cameras to his wedding to Yvette Prieto in Palm Beach, Fla. And Michael won’t be selling his wedding photos to People magazine as Kim Kardashian did when she and Kris Humphries were hitched, in another ceremony at which guests were told to leave their iPhones behind.

But he did want guests to be present during his ceremony, which he and his fiancé had made explicit in advance. “A wedding is about having people paying witness,” Michael later told me. “How can they do that if they don’t even hear your vows because they’re too busy taking pictures?”

The hottest topic in wedding circles this year seems to be whether to request, remind or even require that guests go cold turkey on technology during the event. Everyday couples (which is to say, not just those at risk of being exposed on TMZ) have started treating their guests like paparazzi, confiscating their cellphones and cameras, even throwing them out of the reception if they violate the no-posting-on-Tumblr announcement that the best man makes from under the wedding canopy…

…Bryan Rafanelli, a luxury event planner in Boston whose high-profile wedding clients have included Chelsea Clinton and Matt Damon, said that the trend of asking people to hand over their cellphones began about five years ago, first among celebrities who wanted privacy. “But when we told our noncelebrity clients that it worked, they got turned on,” he said. “It makes them feel special.”

Mr. Rafanelli has found a novel compromise between Big Brother brides who want to ban phones, and tech-savvy guests who can’t live without them. He creates what he calls a cellphone coat check.

Guests deposit their phones at a station, which they can visit periodically, say, after the ceremony or during a boring toast. Mr. Rafanelli sets up sofas, where guests can check in with their children, trade on a stock tip or see how the Yankees are doing. Think of it as the supervised visiting lounge at a prison.

The idea of asking guests to turn away from their devices during the wedding itself is hardly new. Many religious institutions have long banned electronics during services. Rabbi Joe Black, of Temple Emmanuel in Denver, said that when he’s officiating weddings, he asks the couple when they arrive on the pulpit to turn and face the congregation.

June 10, 2013 Funeral Services for Bishop Joseph Sullivan
Browse Our Archives
get the latest from
Catholic
Sign up for our newsletter
POPULAR AT PATHEOS Catholic
1