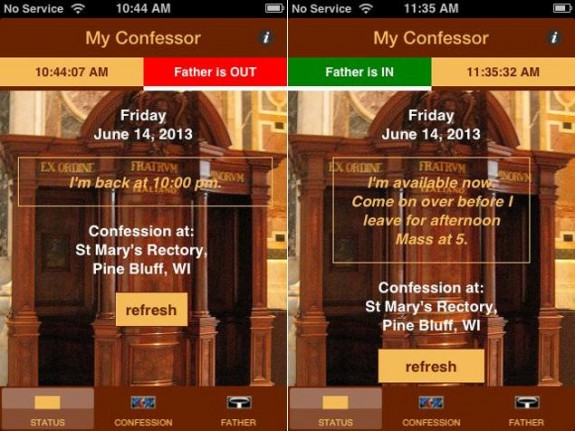 God may be omnipresent — but His priests aren’t.

So a holy man in Madison, Wisc., has turned to app development, along with divine guidance, to find a better way to tend to the needs of his 800-family flock.

Father Richard Heilman is launching a My Confessor App that will let his parishioners know when and where he is available to listen to their sins.

After 25 years in the ministry, Heilman believes Catholics could do with a bit more priest-and-me time. His preferred dosage is at least once a month.

“Maybe more often if you’re dealing with repetitive sin,” Heilman told The News. “A lot of us aren’t in a state of grace and confessions help that grace flow freely.”

Confession is one of the seven sacraments of the Catholic Church. Traditionally, it occurs in an enclosed booth where priest and parishioner can chat through a lattice to preserve anonymity. After repentant souls list out their sins, the priest offers forgiveness and suggests a penance.

But nowadays, there aren’t enough priests to go around. The number of Catholic priests in America has declined in recent decades, according to data collected by the Center for Applied Research in the Apostolate. In 1965, more than 58,000 Catholic priests belonged to the U.S. Conference of Catholic Bishops. In 2012, that number was closer to 39,000. On the other hand, the number of people who self-identify as Catholics has grown from 48.5 million to 78.2 million.

These figures keep Heilman on his toes. He is in charge of three Madison-area parishes, with five Masses to recite every weekend. Factor in baptisms, weddings, funerals and you’ve got one busy priest.

Yes, White People Need to Say...
suspended in her jar
Books by This Author Books by Deacon Greg Kandra