Roman Catholic Bishop of Providence Thomas Tobin revealed Tuesday night that he recently became a registered Republican, but he also emphasized that the church and its mission shouldn’t be viewed through a narrowly partisan lens. 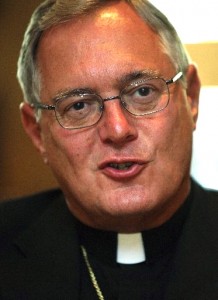 “The a-ha moment for me was the 2012 Democratic National Convention. It was just awful,” Tobin, 65, told the Rhody Young Republicans during an event at the Holy Rosary Band Society Hall in Providence. The leader of Rhode Island’s roughly 621,000 Catholics said he had been a registered Democrat since 1969.

“I just said I can’t be associated structurally with that group, in terms of abortion and NARAL [Pro-Choice America] and Planned Parenthood and [the] same-sex marriage agenda and cultural destruction I saw going on,” Tobin said. “I just couldn’t do it anymore.”

Tobin switched his affiliation to the Republican Party effective Jan. 5, according to voter records reviewed by WPRI.com. He is registered to vote from a house on the 140-acre grounds of the diocese’s Gate of Heaven Cemetery in East Providence.

“I’ve changed my party registration now, but the fact is that the registration itself doesn’t mean a whole lot to me,” Tobin said.

August 14, 2013 Homily for the Vigil of the Assumption
Browse Our Archives
get the latest from
Catholic
Sign up for our newsletter
POPULAR AT PATHEOS Catholic
1

God in Times of Uncertainty
“As they were coming down from the mountain, he charged them not...
view all Catholic blogs
Copyright 2008-2020, Patheos. All rights reserved.