Just war: what theologians are saying about an attack on Syria

Just war: what theologians are saying about an attack on Syria September 5, 2013 Deacon Greg Kandra 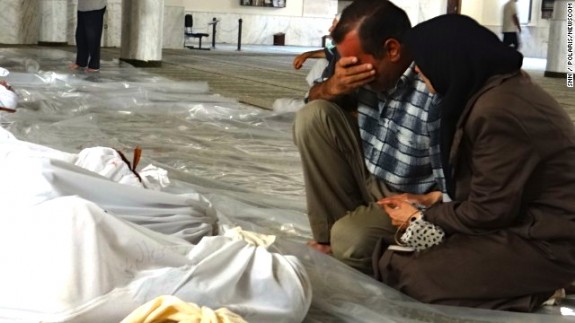 A valuable overview, from the National Catholic Reporter:

Traditionally, moral theologians have argued that to use military force justly, one must have a just cause; the use of force must be the last resort; success must be probable; the means must be proportionate; and the military action must be by a legitimate authority.

As the Obama administration prepares to respond to the use of chemical weapons in Syria, what are the ethicists saying about the morality of military intervention? In this article, I will examine their views about whether intervention in Syria fits the criteria of a just war. Links are provided to the more complete thoughts of each expert.

No moralist supports the actions of the regime of Bashar Assad or the use of chemical weapons, and no one is an enthusiastic supporter of the rebels. Under these circumstances, is there a moral case for intervention?

Although he acknowledges that nerve gas is a terrible weapon, Stanely Hauerwas of Duke Divinity School argues that there is no moral justification for intervention: “Syria isn’t attacking the United States.” Self-defense would be the only justification for the use of force.

But most other moralists recognize a responsibility to protect innocent people, and they support their argument by pointing to the United Nations’ doctrine of the Responsibility to Protect (R2P), adopted in 2005. This would include thinkers like Matthew Shadle of Loras College,William Galston of the Brookings Institution, Drew Christiansen of Boston College, Rabbi Michael Broyde of Emory University, Kevin Ahern of Manhattan College, Tobias Winright of St. Louis University, and Maryann Cusimano Love of The Catholic University of America.

But even those who believe in the responsibility to protect innocents say more is required if the just war criteria are to be met.

From a just war perspective,” Winright writes, “I do not see how military intervention is morally justified if we take into consideration — as we must — other criteria, besides only just cause, of the just war tradition.” Most agree with him.

September 4, 2013
A prayer for today—and every day
Next Post

September 5, 2013 Life in the echo chamber: plugged in, but still disconnected
Browse Our Archives
get the latest from
Catholic
Sign up for our newsletter
POPULAR AT PATHEOS Catholic
1