“Jesus can be found through your wounds”: popes and the disabled

Yesterday, during his visit to Assisi, Pope Francis made a memorable and moving stop at a home for disabled youth. Rome Reports has a video below.

Commenters on social media couldn’t stop talking about it.  One reader wrote to me: “What did I do to deserve to be alive for this pope?”

You’d almost think this kind of papal visitation was something utterly new. It isn’t. While he’s made love for the poor and the handicapped a hallmark of his papacy, Francis is actually part of a beautiful and inspiring tradition of papal outreach to the sick, especially those who are young.  In spending time with the disabled and drawing attention to them, he’s continuing a practice undertaken by his recent predecessors.

During his trip to the United States in 2008, Pope Benedict met with disabled children  during a stop at the seminary in Dunwoodie, New York. 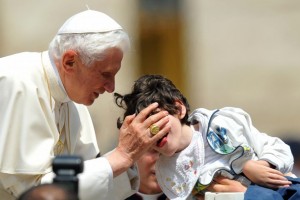 Benedict also made a prominent visit to a hospital for the disabled during World Youth Day in Madrid in 2011:

Among the groups honored by an audience with the Holy Father during World Youth Day, was a group of sick and disabled youth from St Joseph’s Hospital. Like the seminarians, university professors, and women religious, the Holy Father wanted to remind them of their vital importance in the life of the Church. This may surprise some, after all, the disabled youth who greeted the Holy Father needed escorts to help them walk up to greet him, and often they were unable to communicate with words when they did. This did not stop the face of the pontiff from radiating a quiet joy as he embraced each one in turn, expressing his love for them.

Watching this moving scene, I was reminded of a similar moment in the chapel of the Seminary in Dunwoodie, New York, where, in 2008, the Holy Father had come to greet disabled children. One young lady with Down syndrome brought a picture to the Holy Father with her friend. She reached up to hug him, and realized her friend was excluded, so she snatched her up in a three way bear hug, which brought many of us watching to tears.

The disabled have many things to teach society, as the Holy Father affirmed in his remarks in Madrid. First, the suffering serve as a means by which the humanity of society is measured:

“A society unable to accept its suffering members and incapable of helping to share their suffering and to bear it inwardly through ‘com-passion’ is a cruel and inhuman society” (Spe Salvi, 38).

And then, of course, there was the history-making encounter between Pope John Paul II and singer Tony Melendez in Los Angeles in 1987.  The video of that performance, and what happened after, is still a stunner.  Just watch. At the time, no one had ever seen a pope like this.

Clearly, Pope Francis is following in his footsteps.

I hope Tony is there for the canonization in April.

October 5, 2013 Scalfari interview with Francis: he didn't tape it or take notes. So how accurate is it?—UPDATED
Browse Our Archives
Related posts from The Deacon's Bench