Scalfari interview with Francis: he didn’t tape it or take notes. So how accurate is it?—UPDATED

From John Allen in NCR:

While stressing the basic “trustworthiness” of a recent blockbuster interview with Pope Francis by Italian journalist Eugenio Scalfari, Fr. Federico Lombardi, the Vatican spokesman, left room on Oct. 2 for the possibility of small imprecisions. 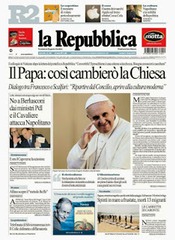 Cardinal Timothy Dolan of New York, who was among the cardinals who elected Francis, today confirmed one such error – a point of fact, as it happens, with important implications for understanding the immediate reaction of Pope Francis to his election.

Dolan told NCR that in contrast to the scene described by Scalfari, there was no moment when Cardinal Jorge Mario Bergoglio of Argentina left the Sistine Chapel after his election but before accepting the papacy.

Instead, Dolan said, Francis accepted immediately and then left the Sistine Chapel, as is customary, to vest in the “room of tears” before returning to greet the cardinals.

“He never left the Sistine Chapel before accepting,” Dolan said. “All that came later.”

Dolan spoke to NCR at the North American College in Rome.

The Scalfari interview was published by the Italian newspaper La Repubblica Oct. 1, setting off shock waves due to the pope’s candor on multiple fronts – calling the trappings of a royal court in the Vatican “leprosy,” complaining that too many church officials are “Vatican-centric,” and so on.

Pressed by reporters on the reliability of the direct quotations, Lombardi said during an Oct. 2 briefing that the text accurately captured the “sense” of what the pope had said, and that if Francis felt his thought had been “gravely misrepresented,” he would have said so.

Nonetheless, Lombardi stopped short of saying that every line was literally as pronounced by the pope, suggesting instead that it represents a new genre of papal speech that’s deliberately informal and not concerned with precision.

Respected French Vatican writer Jean-Marie Guénois confirmed with Scalfari that he didn’t tape the interview, nor did he take notes, so the text was an after-the-fact reconstruction. Scalfari said he showed the text to Francis for his approval, but it’s not clear how closely the pope read it.

UPDATE: Simcha Fisher is having trouble picking her jaw up from the floor:

I’m just a teeny, two-bit, part-time writer on the very outer fringes of what could possibly be considered journalism, and even I know that this is outrageous.  Insanely irresponsible.  Something that should make people lose their jobs and all credibility forever.  Holy shit.  As my sister Devra Torres said, “So we’re commenting on a bad translation of a hazy memory in the mind of a presumably heavily biased source.”  One more thing?  Scalfari is 88 years old.  But I’m sure his memory is completely accurate.

Holy shit, indeed.  I’ve been doing this stuff for about 30 years—and not exactly in the outer fringes—and I TAPE EVERYTHING.  I don’t trust my memory, or my handwriting (which is, at this stage of my life, indecipherable anyway) and even if I’m doing an interview over the phone, I’m typing furiously on a keyboard to get it right. I’ll sometimes repeat answers to make sure that’s what they intended to say. I don’t want to leave anything to chance. I’m not smart enough to remember EVERYTHING and we fallible humans have a tendency to reshuffle the cards in the deck of memory. But this interview reads like a transcript. It isn’t. Far from it.

The only evidence we have that this interview is a reliable representation of what the pope said is that the pope reportedly approved it. But the Vatican admits they aren’t sure how closely he read it—with the Jesuit interview, I believe, he made a few small adjustments to the text.  And then there’s the whole question of the quality of the translation. A lot of people have already described the original as flawed.

Bottom line: there’s less to this interview than meets the eye. (I wonder if the Vatican knew that before posting it on its website…?)

October 5, 2013
"Jesus can be found through your wounds": popes and the disabled
Next Post

Everybody's Got Theirs
I saw Kevin Smith’s Clerks III (2022) the first night it was...
view all Catholic blogs
Copyright 2008-2021, Patheos. All rights reserved.
Close Ad