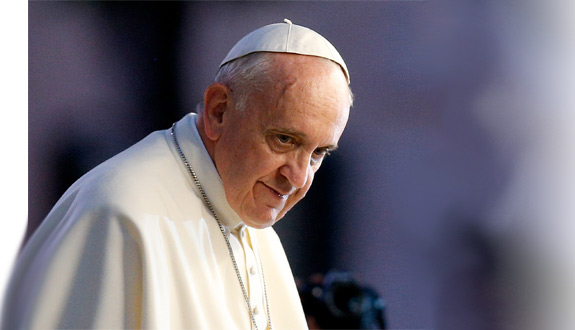 America has the details:

Pope Francis turned to pen and paper to respond to a letter from a group of gay and lesbian Italian Catholics sent in June, according to the Italian daily La Repubblica(Note: this account in English relies on a Google translation; it may be imperfect). The group had written to Pope Francis in a personal appeal to to be recognized as people and not as a “category.” A leader of the impromptu committee said as gay Catholics they had in the past written to other members of the church leadership in Italy and had always before been rewarded with silence.

In their letter, a group of gay and lesbian Catholics organized into the group, Kairos of Florence, asked for openness and dialogue, noting that closure to discussion “always feeds homophobia.” The members were shocked to receive a personal response to their appeal from Pope Francis. One leader of the group told La Repubblica “no one had ever even given a nod of response” before. The Kairos group said they also received a letter from the Vatican Secretariat of State, which informed them that Pope Francis “really enjoyed” their letter to him and the way it was written, calling it an act of “spontaneous confidence.”

One Kairos leader said Pope Francis had also assured the group of his blessing, something they could not before have imagined happening. The members of Kairos have decided to keep the rest of the message of both letters private.

As The Anchoress noted yesterday:

That’s why, when a group of gay Catholics wrote to Pope Francis, he wrote back assuring them of his “greeting and blessing.” Because first you show the human being before you that you see their God-loved-into-being humanity, and the evangelization flows from there.

October 10, 2013
Some advice on the shutdown from the bishops
Next Post

October 10, 2013 All are welcome—except those who aren't: addressing non-Catholics and Communion at Mass—UPDATED
Browse Our Archives
get the latest from
Catholic
Sign up for our newsletter
POPULAR AT PATHEOS Catholic
1