BREAKING: Archbishop Nienstedt steps aside from public ministry after allegation

The announcement from the Archdiocese: 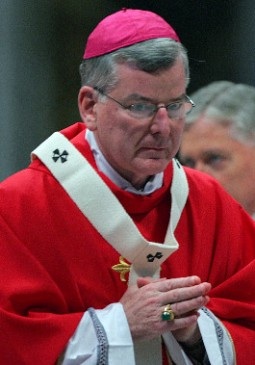 The Archdiocese of Saint Paul and Minneapolis today announced that an allegation has been brought by a mandated reporter within the Church to the St. Paul Police of inappropriate touching of a minor male on the buttocks by Archbishop John Nienstedt. The single incident is alleged to have occurred in 2009 during a group photography session with the archbishop following a confirmation ceremony. Archbishop Nienstedt emphatically denies the allegation. Upon learning of the allegation last week, the archdiocese instructed the mandated reporter to make the matter known to the police. The archbishop and the archdiocese stand ready to cooperate fully with the St. Paul Police.

After consultation with the Holy Father’s ambassador to the United States (the papal nuncio), the archbishop will voluntarily step aside from all public ministry while this matter is being investigated, effective immediately. Auxiliary Bishop Lee Piché, in his role as a vicar general, will cover all of the archbishop’s public duties during this time. Father Charles Lachowitzer continues in his position as a vicar general and moderator of the curia.

The archdiocese is mindful of the due process concerns of those involved. There must be justice and due consideration of the rights and dignity of every human person, both the individual involved and the archbishop. This is not only the bedrock of our beliefs as Catholics, but also of the justice system of our country.

The Archbishop, meantime, has posted a letter on the archdiocesan website:

Dear Brothers and Sisters in Christ,

This is a difficult letter for me to write to you. This past weekend I learned of an allegation from a young man whom I anointed in the Sacrament of Confirmation who alleged that he believes I inappropriately touched his buttocks during a public photo session following the ceremony. Please allow me to say that I normally stand for those photos with one hand on my crozier (staff) and the other either on the right shoulder of the newly confirmed or on my pallium (the short stole), which hangs from my chest. I do that deliberately and there are hundreds of photographs to verify that fact.

I do not know the individual involved; he has not been made known to me. I presume he is sincere in believing what he claims, but I must say that this allegation is absolutely and entirely false. I have never once engaged in any inappropriate contact with a minor and I have tried to the very best of my ability to serve this Archdiocese and the church faithfully, with honor and due regard for the rights of all, even those with whom I disagree.

I have taken strong stands on the moral teachings of the Church and been criticized for it. I would not have done so if I did not believe those teachings and was personally bound to living up to them in practice.

True, I am a sinner, but my sins do not include any kind of abuse of minors. I have met victims and I know the lasting damage that such abuse causes.

The psalms from the Liturgy of the Hours have had a special echo in my heart these past weeks as I pray for those in distress. “But God does hear the cries of the poor. Blessed be the Lord.”

I hope that the investigations can be thorough but quick. I already long to be back in public ministry—to be able to serve as the Lord has called me to serve.

I regret this will be my last column until the present investigations are complete. These days will give me the time to pray for you and the individual involved. I ask that you pray for me too.

With every good wish, I remain

Cordially Yours in Christ,

The Most Reverend John C. Nienstedt
Archbishop of Saint Paul and Minneapolis

December 17, 2013 "It's worthwhile being a vagrant because you get to meet the pope!"
Browse Our Archives
Related posts from The Deacon's Bench