From the Arlington Heights Daily Herald in Illinois:

A year after controversy in Arlington Heights about whether to allow a Nativity scene on public property, both the Nativity and a sign with views against religion are coexisting — mainly peacefully — in North School Park this holiday season. 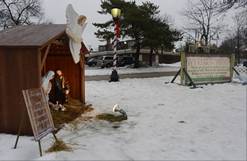 The Nativity scene, paid for by Jim Finnegan, chairman of the Illinois Nativity Scene Committee, sits next to a sign from the Freedom From Religion Foundation reading, in part, “Religion is but myth and superstition that hardens hearts and enslaves minds.”

The two displays were approved by the Arlington Heights Park District under its new policy for petitioners, including that they must clearly post that the displays are not paid for or supported by the park district.

Legally, if the park district allows one religious display on its property, it cannot exclude others, officials have said, but some people still aren’t happy.

“To me that’s intolerant and demeaning to put next to a holy symbol,” Gregory Novak, said of the anti-religion sign.

The former Arlington Heights resident, who visited the Nativity recently with his family, said he is not against having multiple displays of varying beliefs in the park, but that the wording on the Freedom From Religion sign offended him.

“What was supposed to be about tolerance has become intolerance,” he said. “Why is it OK to attack and demean our beliefs or say our viewpoint is wrong?”

December 21, 2013
"The Anxiety of Joseph": a homily for the 4th Sunday of Advent
Next Post

December 22, 2013 Homily for December 22, 2013: 4th Sunday of Advent
Browse Our Archives
get the latest from
Catholic
Sign up for our newsletter
POPULAR AT PATHEOS Catholic
1