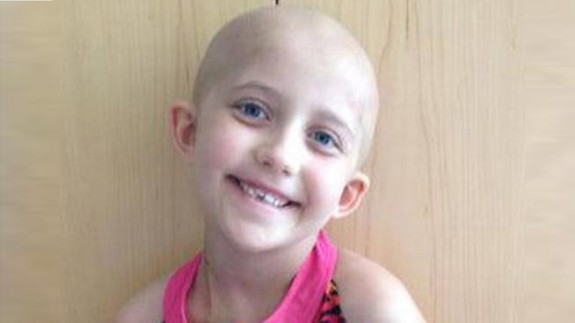 You probably saw this story a few days ago.

Her journey has come to an end:

A little girl whose Christmas wish inspired thousands of people to sing in the streets died overnight.

“Our little angel on earth earned her pink glittery angel wings in heaven,” a post on an official Facebook page about her said. “She took her last breath at home in her bed at 3:10 surrounded by all her family and friends. I miss her so much already.”

Delaney Brown of West Reading, Pennsylvania, “inspired a community and touched hearts across the world,” as CNN affiliate WFMZ put it.

She loved music and dancing.

Her dying wishes were to meet country music superstar Taylor Swift and for some people to come by her house for a night of caroling.

On Friday — her birthday — Laney and Swift video-chatted through FaceTime, a software application that allows callers to see each other on Apple products.

Then, Saturday night, the singers came. At first it was hundreds of people, then thousands. Then it was about 10,000, CNN affiliate WFMZ reported.

She was too weak to go to the window, but heard the wonderful music.

“I can hear you now!!! Love you!” she said in a Facebook post that showed a photo of her lying in bed with a breathing mask — and two thumbs up.

Laney was diagnosed with acute myeloid leukemia seven months ago. Last week doctors told her family that she had 70% cancer cells in her blood. She came home from the hospital Thursday.

The Christmas carol celebration outside her home attracted people from all over. Her dance team was there to honor her. Even Santa showed up.

Many of the singers held back tears.

“I can’t even express how I feel,” Krysta Rebe, who has a daughter Laney’s age, told WFMZ.

It was only an hour of singing, but it lifted the spirits of everyone who jammed the block.

December 25, 2013
Obama: "Service is a chance to celebrate the birth of Christ and live out what He taught us..."
Next Post

December 26, 2013 A prayer to St. Stephen
Browse Our Archives
get the latest from
Catholic
Sign up for our newsletter
POPULAR AT PATHEOS Catholic
1