I would normally ignore something like this. But when it appears in a media outlet as prominent as U.S. News & World Report, this demands attention.

The author, Jamie Stiehm, takes issue with Supreme Court Justice Sonia Sotomayor’s New Year’s Eve ruling in favor of the Little Sisters of the Poor—and then unleashes what can only be described as a bigoted rant.

Try to imagine a sentence like this appearing in any mainstream publication:

Jews  often try to impose their beliefs on you, me, public discourse and institutions. Especially if “you” are female. This is not true of all Jews – but Jews in high places of power have the most trouble, I’ve noticed, practicing the separation of church and state…

But that, in effect, is what Stiehm has said, in reference to Catholics.

Et tu, Justice Sonia Sotomayor? Really, we can’t trust you on women’s health and human rights? The lady from the Bronx just dropped the ball on American women and girls as surely as she did the sparkling ball at midnight on New Year’s Eve in Times Square. Or maybe she’s just a good Catholic girl.

The Supreme Court is now best understood as the Extreme Court. One big reason why is that six out of nine Justices are Catholic. Let’s be forthright about that. (The other three are Jewish.) Sotomayor, appointed by President Obama, is a Catholic who put her religion ahead of her jurisprudence. What a surprise, but that is no small thing…

…Sotomayor’s blow brings us to confront an uncomfortable reality. More than WASPS, Methodists, Jews, Quakers or Baptists, Catholics often try to impose their beliefs on you, me, public discourse and institutions. Especially if “you” are female. This is not true of all Catholics – just look at House Democratic Leader Nancy Pelosi. But right now, the climate is so cold when it comes to defending our settled legal ground that Sotomayor’s stay is tantamount to selling out the sisterhood. And sisterhood is not as powerful as it used to be, ladies.

Catholics in high places of power have the most trouble, I’ve noticed, practicing the separation of church and state. The pugnacious Catholic Justice, Antonin Scalia, is the most aggressive offender on the Court, but not the only one. Of course, we can’t know for sure what Sotomayor was thinking, but it seems she has joined the ranks of the five Republican Catholic men on the John Roberts Court in showing a clear religious bias when it comes to women’s rights and liberties. We can no longer be silent about this. Thomas Jefferson, the principal champion of the separation between state and church, was thinking particularly of pernicious Rome in his writings. He deeply distrusted the narrowness of Vatican hegemony.

I’m sure some editor at U.S. News thought, “Well, it’s an opinion piece, and this is fair comment.”

If so, they should have thought about this a little harder. A common definition of “fair comment”:

A statement of opinion (no matter how ludicrous) based on facts which are correctly stated, and which does not allege dishonorable motives on the part of the target of the comment. The U. S. Supreme Court has ruled that to protect free speech, statements made about a public person (politician, officeholder, movie star, author, etc.), even though untrue and harmful, are fair comment unless the victim can prove the opinions were stated maliciously—with hate, dislike, intent and/or desire to harm.

I would have a hard time not finding hate, dislike or malice in Stiehm’s essay.

Rather than taking issue with one justice’s opinion, or attempting to dissect the legal thinking behind it, Stiehm takes the bigot’s way out: it’s because Sotomayor is Catholic, dammit, and you know how those Catholics are.

I find Jamie Stiehm’s essay objectionable and offensive—as a Catholic, but also as a journalist. It comes perilously close to hate speech, and betrays an attitude toward Catholicism that harkens back to the crude cartoons of Thomas Nast and the anti-Catholic nativism of the 19th century.

Stiehm should be ashamed.  So should U.S. News & World Report.

UPDATE: The Anchoress undertakes a thorough fisking of Stiehm’s screed—and it’s a must-read.

January 8, 2014
Report: number of Christians who died for their faith in 2013 doubled
Next Post

January 8, 2014 "The Blessing of Automobiles by Total Immersion"
Browse Our Archives
Related posts from The Deacon's Bench 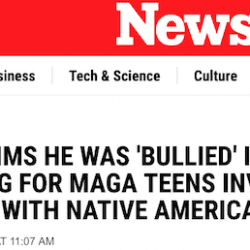 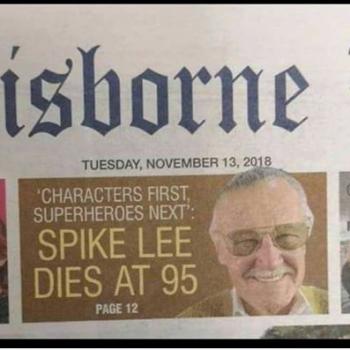