“Clericalism is bad for priests and laity”

Vatican Insider spoke recently with the Prefect of the Congregation for the Clergy, Beniamino Stella, who will receive the red hat of Cardinal later this month.   He had some choice words about the vocation of the priesthood—which could also apply, I think, to deacons:

There has often been talk of an identity crisis among priests in today’s society. How do you perceive the ideal priest to be?

“The priest essentially exists to do what Jesus did. He helped the sick and all those who sought his assistance by showing the merciful side of God, healing souls, forgiving sins, proclaiming the Kingdom of Heaven, without kicking anyone out but understanding their needs and helping them to grow. So I would say that a priest is someone who wants to obey Jesus every day, even if this involves sacrifice, someone who makes the Father’s wish his daily sustenance. As priests we must never forget to be “one with Jesus” in order to continue the mission among people. As such, our priority is to “be priests” not to “work as priests”, otherwise we fall into the dispersive and harmful realm of activism.”

The Pope has warned against the risk of clericalism on a number of occasions. What is
it and how does the Prefect of the Congregation for the Clergy see it? 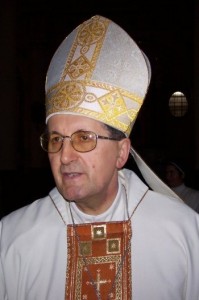 “”Clericalism” is a word that has been on the Pope’s lips a great deal in recent months. I think I am right in saying that what the Holy Father means when he refers to the term “clerical”, is that it describes the kind of priest who wants to give orders, who always thinks he knows best and becomes closed, hindering the mission of the Church. A clerical priest is a priest who withdraws into his own shell, into his own mindset and does not consult or listen to others, especially the laity, as he doesn’t recognise the role of lay people in the Church’s mission. Sometimes, these kinds of priests believe they can dominate over others, especially the poor and ignorant and that they belong to some kind of cast, claiming certain privileges and powers. “Clericalism” is bad for priests because it distorts their mission and is harmful for the laity because it hinders their development as adult Christians. This word, “clericalism”, is a call to us priests to examine our consciences every day so that we don’t forget that being clerics means being in a condition to bear witness to the faith in a more efficient way and show deep commitment to our vocation. Being a cleric does not give us some kind of social status that places up above others. This would create a gap between us. These are real risks for the pastoral ministry and we need to guard against them. To keep them at bay we must keep our focus on the Cross, the humble and silent Virgin Mary who listens, suffers and gives herself. I hope everyone, myself included, can undertake this journey every day with God’s help.”

February 13, 2014 Ready for summer? Here.
Browse Our Archives
get the latest from
Catholic
Sign up for our newsletter
POPULAR AT PATHEOS Catholic
1

Comparing COVID Vaccine to Other Vaccines
For decades, Catholic ethicists have approved of several vaccines in the USA...
view all Catholic blogs
Copyright 2008-2021, Patheos. All rights reserved.
error: Content is protected !!