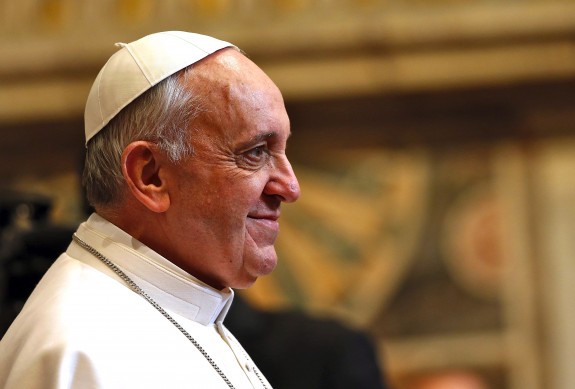 It almost happened, according to David Gibson:

On a day when everyone is recalling Pope Benedict XVI’s historic — and stunning — announcement last Feb. 11 that he intended to resign the papacy comes a fascinating revelation from the 2005 conclave that elected Benedict:

Cardinal Jorge Mario Bergoglio, who reportedly ran second to Cardinal Joseph Ratzinger in that conclave, later told a fellow cardinal that if he had been elected then he would have taken the name “John” after Pope John XXIII.

Instead, Bergoglio was elected in March of last year two weeks after Benedict resigned and became the first pope named after Francis of Assisi.

“Good Pope John,” as John XXIII is known, also stunned the church and the world by calling the Second Vatican Council that in the 1960s introduced numerous reforms and ushered Roman Catholicism into the modern world.

“John, I would have called myself John, like the Good Pope; I would have been completely inspired by him,” Bergoglio told Cardinal Francesco Marchisano, according to a new book by longtime Italian Vaticanista Gianluca Barile.

February 11, 2014
Want to understand the Mass? There's an app for that.
Next Post

February 11, 2014 Who did Francis call after his election as pope?
Browse Our Archives
Related posts from The Deacon's Bench

Come and Stay
“Come and stay at my house” These are the words of Lydia...
view all Catholic blogs
Copyright 2008-2021, Patheos. All rights reserved.