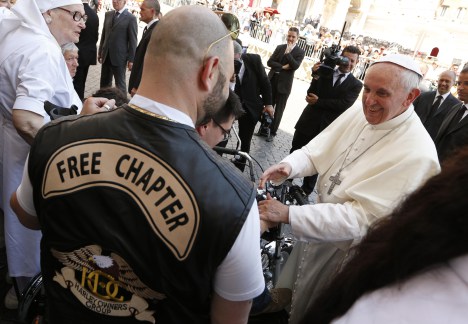 From the CNS blog:

A Harley-Davidson Dyna Super Glide that Pope Francis put up for auction went for a hefty $326,500 today, demolishing its pre-sale appraisal of $16,000.

The record sale was the hit of the day as hundreds of bidders and spectators attending the Paris auction “erupted into applause when the hammer came down,” according to the Bonhams auction house.

Bidding was fierce, Bonhams said, and lasted a full six minutes. The 2013 autographed bike went to “a private European buyer” who was bidding over the telephone.

Read more and learn where the money is going here.

February 6, 2014
"Firing an unwed pregnant Catholic school teacher is not pro-life"
Next Post

February 6, 2014 Obama at prayer breakfast: "Religion strengthens America"—UPDATED
Browse Our Archives
get the latest from
Catholic
Sign up for our newsletter
POPULAR AT PATHEOS Catholic
1