John Allen on the Church’s newest “pro-life” cause 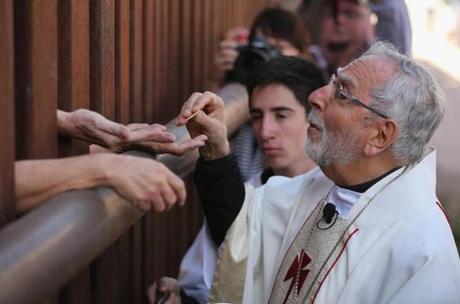 From his column in The Boston Globe:

In Catholic parlance, certain terms carry weight far beyond their face value meaning. Calling something a “pro-life” issue, for instance, means not only that it involves the church’s teaching on the sacredness of human life, but that it merits an investment of blood, sweat, and tears tantamount to the church’s struggles against abortion and birth control.

In that sense of the term, Tuesday, April 1, 2014, may go down as the day immigration reform officially became a “pro-life” cause for the Catholic church in the United States.

Bishops and other church leaders in America have advocated immigration reform for years, but they’ve never been more emphatic or creative about it than on Tuesday, when a delegation of nine American prelates led by Cardinal Sean P. O’Malley of Boston traveled to Nogales, Ariz., to celebrate a Mass at the United States/Mexican border, to lay a wreath at the border commemorating the estimated 6,000 people who have died trying to make the crossing, and to stage a news conference urging reform of what they called a “broken system.”

The liturgy featured an instantly iconic visual of O’Malley and Bishop Gerald Kicanas of Tucson distributing communion to outstretched hands from the Mexican side of the border through slats in a 20-foot-high security fence.

Using phrases that immediately perk up Catholic ears, O’Malley told the Globe that defending immigrant rights is “another pro-life issue.” He also said no Catholic who takes church teachings seriously can support the status quo, because “the law is inadequate and unjust.”

Since O’Malley profiles as Pope Francis’ closest adviser in the United States, having his weight behind those assertions gives them real force.

(In terms of church politics, one could perhaps style the other prelates who made up the delegation as well-meaning social justice types who don’t really flex much muscle in the church. That’s why O’Malley’s presence was vital, because nobody would say that about him.)

The bishops didn’t just parachute in for a photo-op. They spent three days on both sides of the border, listening to people who’ve faced staggering hardships.