Belgian Police have charged a 57 year old man with 10 cases of illegal euthanasia.
The man, identified as Deacon Wevelgem was working in the Sacred Heart Hospital in Menin up until 2002 where, presumably the deaths occurred over a period of years.

Belgium’s euthanasia laws came into effect in 2002 rendering, one would assume, any euthanasia deaths before that time subject to the Belgian criminal code on homicide.

The fact that these deaths are supposed to have occurred in a Catholic Hospital with Wevelgem holding the position of Deacon will no doubt be a significant embarrassment to the Belgian Catholic Church; the Diocese of Bruges commenting that, “Euthanasia and Deacon are two words that should not be in the same sentence.” 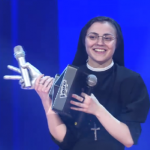 June 5, 2014 She did it: Sister Cristina wins "The Voice," prays the Our Father
Browse Our Archives
Related posts from The Deacon's Bench

Not the Best Friday Evening
On Friday evening, I got into Serendipity for her maiden voyage. I'd...
view all Catholic blogs