His marriage was later annulled. But this is definitely a vocation story you don’t hear about every day:

Springfield Bishop Timothy A. McDonnell ordained two, new priests for the Diocese of Springfield, today, June 7, at  an 11 a.m. Mass at St. Michael’s Cathedral, here. Father Christopher Andrew Fedoryshyn, 29, of Pittsfield and Father Francis (Frank) Jeffrey Lawlor, 57, a native of New Haven, became the two newest priests for the diocese. In a moving liturgy, the two men promised obedience and “expressed resolve to consecrate their lives to God and for the salvation of his people and to unite themselves more closely every day to Christ the High Priest.”

Following the ordination Mass, which was attended by about 500 people, the priests expressed their thoughts on this eventful day. “I feel incredibly uplifted and joyful and eager to serve the people of God,” said Father Fedoryshyn. 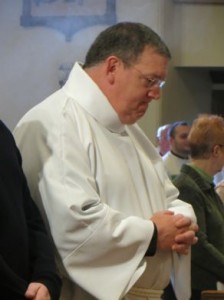 …Father Lawlor is the son of the late Eugene and Mary Jane Lawlor. He graduated from Notre Dame High School in West Haven, Conn., in 1974. He then attended Providence College in Providence, R.I. and Southern Connecticut State College. He earned his bachelor’s degree in philosophy from St. Mary’s Seminary and University in Baltimore in 1978.

He was married and has three grown children: Colleen, Matthew and Timothy and a grandchild.

Just prior to entering the seminary, Deacon Lawlor was the development director for the Newman Catholic Center at the University of Massachusetts Amherst. He was a seminarian at Blessed John XXIII National Seminary in Weston, Mass.

Father Lawlor heard the call to priesthood a little later in life.

“I spent 25 years as a stock broker, a very good life and did very well. Circumstances came to pass and I found myself divorced, trying to figure out what to do with my life. I had good friends who were priests. I started talking with them and it became possible to see what was possible. So I talked to Father (Gary) Dailey, the marriage was eventually annulled. Luckily the bishop and the vocations director (Father Dailey) were open to the possibility,” he said.

June 13, 2014 I'm such a sap. I loved this.
Browse Our Archives
Related posts from The Deacon's Bench