In the email: “Do children no longer have to be baptized with saints’ names?”

In the email: “Do children no longer have to be baptized with saints’ names?” June 27, 2014 Deacon Greg Kandra 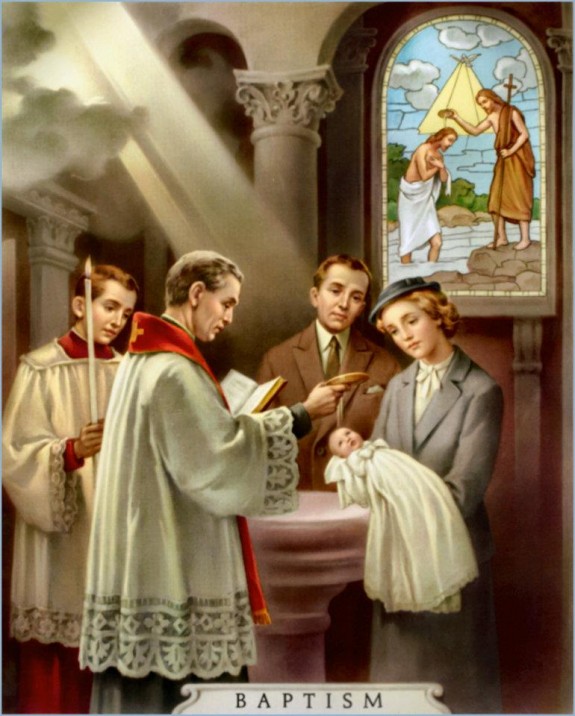 In our parish, the two youth ministers are Heather and Austin. Last Sunday Father baptized a Tiffany,a Madison, and a Greysen. I remember when my children were being baptized in the ’80’s Father made a point of saying that the names were “approved” as they were saint’s names.

And I remember a friend of mine in grammar school who used an Irish name as a “nickname” as she could not have it as her “real” name since it was not a saint’s name.

So my question is this – do children no longer have to be baptized with saints’ names? The two youth ministers are about 10 years younger than my children so probably baptized in the ’90’s so was there a change of the rule at about that time?

Good question. I meet with parents regularly about baptisms, so it would not be an exaggeration to say that some of the names are a little, well, different. Many are ethnic names utterly foreign to me, and I always end up saying, “What a, er, pretty name. What does it mean?”  (Sometimes I get interesting answers like, “It’s the first letters of all our friends strung together. Beautiful, isn’t it?”)

Anyway: here’s what canon law says on the subject:

Can.  855 Parents, sponsors, and the pastor are to take care that a name foreign to Christian sensibility is not given.

And that’s it. There are no requirements that the child be named for a saint.

In fact, the canon does not specify that at baptism a child must receive any particular sort of name at all. Rather, since it is worded in the negative, we are only told what sorts of names may not be given to a child at his baptism.

While it goes without saying that it is laudable for Catholic parents to choose a saint’s name for their child, it is not actually necessary. Thus it’s quite possible for a Catholic priest to baptize “Ashley” and “Jennifer,” “Curtis” and “Todd.” Even if there may be no canonized saints with these same names, there is certainly nothing unchristian about them.

So what is an example of a name that could not be given to a Catholic child at baptism, because it is foreign to Christian sentiment? Obvious non-options would include “Satan,” “Lucifer,” and “Death”; names like “Hitler” and “Stalin” would presumably raise an instant red-flag as well. If parents were to announce to their pastor that they had chosen such a name for their child, he would have every right to ask them why! Is there conceivably an innocent and legitimate reason for giving such a name to a Catholic child?

Based on this canon, the priest who was to baptize the child would have not only the right, but the obligation to object to the name—as would the child’s godparents as well. The parents would be required to choose another name instead. If they were to persist in their offensive choice, the baptism simply could not take place.

This is not merely a question of personal taste.  If a priest is to baptize a child, there must be a well founded hope that the child will be raised in the Catholic faith (c. 868.1 n.1). If the parents wanted to give a bizarre, unchristian name to their child, it would be altogether natural for the parents’ pastor to question their intentions! Are they serious about rearing their child as a Catholic? Or do they regard the whole baptismal ceremony as an empty tradition or even a joke? It is the pastor’s duty to find out.

We can see that within these broad parameters, the current law on this matter is quite general.

The author, however, also notes that the new Code of Canon Law took effect in 1983. Regarding the previous law, she notes:

Canon 761 of the 1917 code said that pastors were to ensure that those who were to be baptized received a Christian name. It added that if this could not be done, the name of “some saint” was to be added to the name chosen by the parents, and in the baptismal record both names were to be recorded. Note that the first part of the canon didn’t actually say that the name had to be a saint’s name; it merely said that the name had to be Christian. This is why in practice, children were occasionally given baptismal names like “Christian,” “Grace,” and “Faith.” Strictly speaking, these might not be saint’s names—but as they obviously described concepts directly related to the Catholic faith, they were traditionally considered equally acceptable choices.

As for the original question, and the instances cited: Austin, in fact, is a variation of Augustine. And I baptized a girl named Madison recently; in the process, I learned the name is derived from Maud, another saint. Sometimes, we walk among saints and don’t even know it!

June 28, 2014 A great day for Brooklyn
Browse Our Archives
get the latest from
Catholic
Sign up for our newsletter
POPULAR AT PATHEOS Catholic
1

Abuse, the Rosary, and an Old-Fashioned...
Steel Magnificat
Books by This Author Books by Deacon Greg Kandra