Praying in Phoenix: “These two are great priests and great men of the church”

Praying in Phoenix: “These two are great priests and great men of the church” June 13, 2014 Deacon Greg Kandra 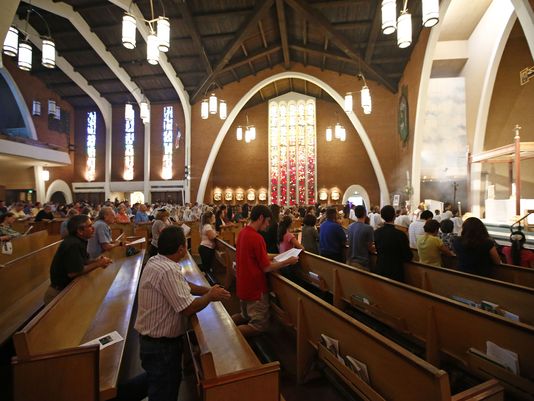 Grief and prayers for two priests who were victims of violence:

June normally brings members of the Roman Catholic church together to celebrate the ordination of new priests. Instead of rejoicing, parishioners on Thursday night filled the pews of one Phoenix church to grieve.

Community members gathered for a rosary and vigil at SS. Simon and Jude Cathedral to remember the life of Father Kenneth Walker and pray for the health of Father Joseph Terra.

Walker, 28, was fatally shot and Terra was critically wounded shortly after 9 p.m. Wednesday at Mater Misericordiae (Mother of Mercy) Mission near 16th Avenue and Monroe Street. Police found the men after receiving a call about a burglary at the church.

“These two are great priests and great men of the church,” Father John Lankeit said, addressing the crowd on Thursday night. “Their service throughout their lives showed true evidence of love.”

Lankeit, rector at the cathedral near 27th Avenue and Bethany Home Road, presided over the rosary and vigil with a message of unity for a community in shock.

In his address, Lankeit spoke often about the pain, grief and confusion that came with Wednesday’s tragedy, but he also offered words of hope to those in need.

“He did what priests do,” said Susan Pietro, of Phoenix. “What else can you do in times like this other than comfort and pray? The community will continue to pray for Father Terra’s recovery and for Father Walker’s soul and for his family.”

June 13, 2014 Tony? Is that you?
Browse Our Archives
get the latest from
Catholic
Sign up for our newsletter
POPULAR AT PATHEOS Catholic
1