SF archbishop responds to critics on the March for Marriage 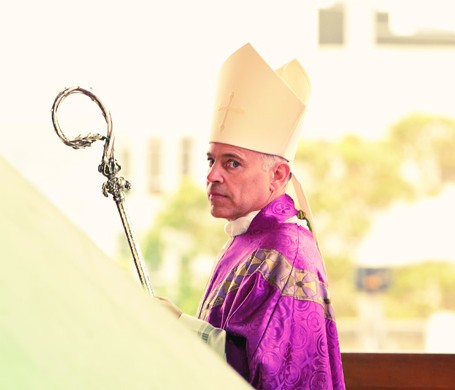 He has posted a letter on the archdiocesan website. He doesn’t mention his most prominent critic, Nancy Pelosi, but several others are named on the letterhead.

Your letter sharing with me your thoughts on the upcoming “March for Marriage” in Washington, D.C., was forwarded to me while I was attending meetings out of town, and I have reflected on what you have to say. I appreciate your affirmation of my Church’s teaching—not unique to our religion, but a truth accessible to anyone of good will—on the intrinsic human dignity of all people, irrespective of their stage and condition in life. That principle requires us to respect and protect each and every member of the human family, from the precious child in the womb to the frail elderly person nearing death. It also requires me, as a bishop, to proclaim the truth—the whole truth—about the human person and God’s will for our flourishing. I must do that in season and out of season, even when truths that it is my duty to uphold and teach are unpopular, including especially the truth about marriage as the conjugal union of husband and wife. That is what I will be doing on June 19th.

With regard to your request that I not attend the March, and the reasons you give for this request, allow me to explain the following points.

1. The March for Marriage is not “anti-LGBT” (as some have described it); it is not anti-anyone or
anti-anything. Rather, it is a pro-marriage March. The latter does not imply the former. Rather, it affirms the great good of bringing the two halves of humanity together so that a man and  a woman may bond with each other and with any children who come from their union. This is precisely the vision promoted by Pope Francis, who recently said, “We must reaffirm the right of children to grow up in a family with a father and mother.” Rest assured that if the point of this event were to single out a group of individuals and target them for hatred, I most certainly would not be there.

2. While I cannot go into all of the details here of your allegations against the sponsors of this event and scheduled speakers, I do know that at least some of what you say is based on misinterpretation or is simply factually incorrect. For example, it is not true that the National Organization for Marriage connects homosexuality with pedophilia and incest. What is true is that three years ago a conference was sponsored in Baltimore by the group B4U-ACT for the purpose of finding ways to encourage tolerance for pedophilia. A statement on NOM’s blogpost objecting to this conference affirmed that this is something that would outrage people in the gay community as well. Unfortunately, many conclusions are being drawn about those involved in the March for Marriage based on false impressions.

3. It gives me assurance that we share a common disdain for harsh and hateful rhetoric. It must be  pointed out, though, that there is plenty of offensive rhetoric which flows in the opposite direction. In fact, for those who support the conjugal understanding of marriage, the attacks have not stopped at rhetoric. Simply for taking a stand for marriage as it has been understood in every human society for millennia, people have lost their jobs, lost their livelihoods, and have suffered other types of retribution, including physical violence. It is true that historically in our society violence has been perpetrated against persons who experience attraction to members of the same sex, and this is to be deplored and eradicated. Sadly, though, we are now beginning to see examples, although thankfully not widespread, of even physical violence against those who hold to the conjugal view of marriage (such as, most notably, the attempted gunning down of those who work in the offices of the Family Research Council). While it is true that free speech can be used to offend others, it is not so much people exercising their right to free speech that drives us further apart than people punished precisely for doing so that does.

4. Please do not make judgments based on stereotypes, media images and comments taken out of  context. Rather, get to know us first as fellow human beings. I myself am willing to meet personally with any of you not only to dialogue, but simply so that we can get to know each other. It is the personal encounter that changes the vision of the other and softens the heart. In the end, love is the answer, and this can happen even between people with such deep disagreements. That may sound fanciful and far-fetched, but it is true, it is possible. I know it is possible, I know this from personal experience. When we come together seeking to understand the other with good will, miracles can happen.

When all is said and done, then, there is only one thing that I would ask of you more than anything else: before you judge us, get to know us.

June 17, 2014 Charlotte ordains its largest group of Hispanic deacons
Browse Our Archives
get the latest from
Catholic
Sign up for our newsletter
POPULAR AT PATHEOS Catholic
1