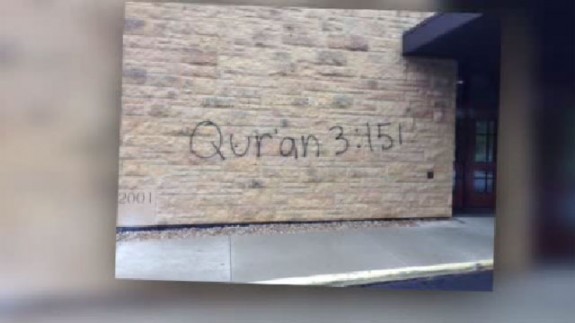 Columbus Police said they’ve never had anything like it – three churches vandalized in the same night.Someone spray painted them on the outside. It’s the words used, though, that have some people asking if this was more than a prank.“It was just one word. It said ‘Infidels!’” Father Doug Marcotte said of what was spray painted on Saint Bartholomew’s Catholic Church in Columbus overnight Saturday.Parishioners saw that, along with the word “Qur’an 3:151” on their way into mass Sunday morning.“It’s certainly not a warm and fuzzy verse. It talks about the infidels, their refuge being the fire,” explained Father Marcotte.Specifically, that passage of the Qur’an reads: “We will cast terror into the hearts of those who disbelieve for what they have associated with Allah of which He had not sent down [any] authority. And their refuge will be the Fire, and wretched is the residence of the wrongdoers.” Saint Bartholomew’s wasn’t the only Columbus church vandalized.“It’s really bizarre and the fact that they hit two other Christian Churches. It’s not like we’re all in a line. So why did they pick the three of us,” asked Father Marcotte.Outside East Columbus Christian Church and Lakeview Church of Christ, members there found the same kind of graffiti Sunday morning.“Is there somebody that really believes this that we’re all infidels so they felt the need to write it all over our church? “ asked Father Marcote. “Is this some sort of nasty prank? Is this someone that’s trying to incite people against Muslims? I mean I don’t know,” he added.Columbus Police said they’re looking at surveillance video to help figure it out.Until they do though, parishioners at Saint Bartholomew’s have been unsettled by the defacing of their church, at the very least.“There’s a lot of bad stuff being done in the name of Allah and so when people see this happening in Columbus, whether that was truly the person’s intent or there’s something else going on, It makes people nervous. It makes people upset. It makes them scared,” said Father Marcotte.

UPDATE: The vandalism is being condemned by some Muslims:

Some members of the Islamic community have condemned the acts and offered to help remove the messages.

“We condemn this, and I read the verse, most importantly what that showed me is the ignorance who actually misquoted or misinterpreted the Quran,” resident Nassim Khaled, a volunteer at a local Islamic center, told WXIN-TV.

Authorities continue to investigate who is responsible for the crimes, though they are urging caution.

“We encourage people to let us investigate this before jumping to any conclusions,” Columbus Police spokesman Sgt. Matt Harris told the Indianapolis Star. “It’s early on — we just don’t know.”

August 31, 2014
The pope's new bishops: "These are not papal acts in name only, but personal decisions by Francis"
Next Post