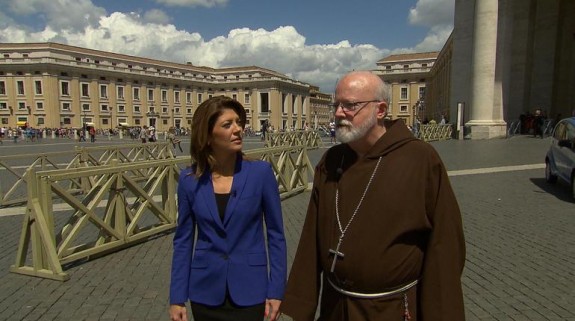 I guess I wasn’t the only one who did a double-take when I heard this on “60 Minutes” Sunday night:

Catholics who thought Boston Cardinal Sean O’Malley’s remarks about Kansas City Bishop Robert Finn’s suitability for office were provocative have another interesting comment to ponder: If he were to start a church, he would “love to have women priests.”

In an interview with “60 Minutes” on CBS that producers said took more than a year for them to persuade him to do, O’Malley seemed troubled by reporter Norah O’Donnell’s question as to whether the exclusion of women from the Church hierarchy was “immoral.”

O’Malley paused, then said, “Christ would never ask us to do something immoral. It’s a matter of vocation and what God has given to us.”

“Not everyone needs to be ordained to have an important role in the life of the Church,” he said. “Women run Catholic charities, Catholic schools …. They have other very important roles. A priest can’t be a mother. The tradition in the Church is that we ordain men.

“If I were founding a church, I’d love to have women priests,” O’Malley said. “But Christ founded it, and what he has given us is something different.”

November 16, 2014
CNN explores the priesthood: a review
Next Post