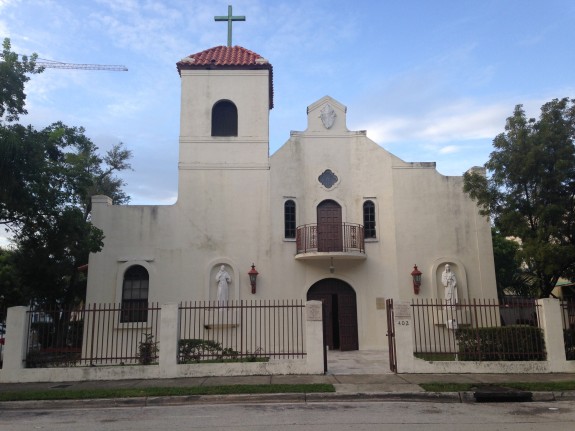 Roman Catholic Mass was at one time universally celebrated in Latin, the ancient Roman language.

Latin is now sometimes referred to as “the dead language,” but it is not dead in Miami.

The Mission of Saints Francis and Clare is a Roman Catholic chapel in Miami that celebrates traditional Latin Mass every Sunday. It’s one of three local churches that offer this regular service. The mission has about 20 pews facing its single stained-glass window just above the altar.

Father Joe Fishwick has been leading the traditional Latin Mass at the chapel for almost 20 years. He says he’s noticed a change in attendance recently.

“The fascinating thing is the number of young people who discover the old liturgy and who fall in love with it,” he says. “There’s indeed a thirst for a return to one’s roots.”

Father Fishwick says he has seen more and more young people at Sunday’s Latin Mass since the death of Pope John Paul II nine years ago.

“I think maybe the younger generation, which has had no experience of that, has been completely starved of it,” says 30-year-old Miamian Josue Hernandez. “They see it and they run to it because they have been so deprived.”

“When you go to the older Mass, you have the Latin, you have the incense, you have the priest facing the crucifix and the focus is completely off you,” he says. “All the attention is turned towards the sacrifice.”

November 21, 2014
Pope: In the Christian community "no one is a stranger," all are welcome
Next Post

November 22, 2014 Homily for November 23, 2014: Solemnity of Christ the King
Browse Our Archives
Related posts from The Deacon's Bench