From The Orlando Sentinel:

Unlike last year, a Satanic Temple display will be officially welcome inside Florida’s Capitol during the holiday season.

And Festivus, a non-commercial festival “for the rest of us,” will be back as a 6-foot stack of empty beer cans. Also expected are a pair of nativity scenes. 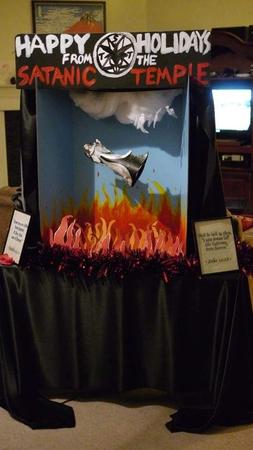 The Florida Department of Management Services this week approved a holiday display from the Satanic Temple, which a year ago was rejected because the agency said it was “grossly offensive.”

The temple’s entry was one of five displays approved to be put up in the first-floor rotunda of the Capitol for the holiday period.

Two additional requested displays, including one to mark the sitcom-created Festivus holiday, are pending final approval. The state agency offered no explanation with its approval of the displays.

John Tupps, a spokesman for Gov. Rick Scott, deferred comment to the department, saying, “DMS makes the rules for the Capitol.”

Lucien Greaves, spokesman for the Satanic Temple, said in an email that “the difference seems to be in the fact that this time around we arrived with lawyers.”

The temple, which threatened to sue after being rejected last year but never took action, is scheduled to put up its display Dec. 22.

The approved display will banner the phrase “Happy holidays from the Satanic Temple” atop a diorama of an angel falling into hell.

“We hope that, this holiday season, everybody can put their religious differences aside and respect that the celebratory spirit of responsible hedonism is available to all,” Greaves said in the email. 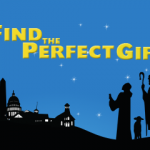 December 4, 2014
All is calm, all is bright: terrific Advent video from the Archdiocese of Washington
Next Post

December 4, 2014 New York court rules chimps do not have human rights
Browse Our Archives
get the latest from
Catholic
Sign up for our newsletter
POPULAR AT PATHEOS Catholic
1

The Legend of St. Eustathius
The legend surrounding St. Eustathius tell us how he went from being...
view all Catholic blogs
Copyright 2008-2020, Patheos. All rights reserved.