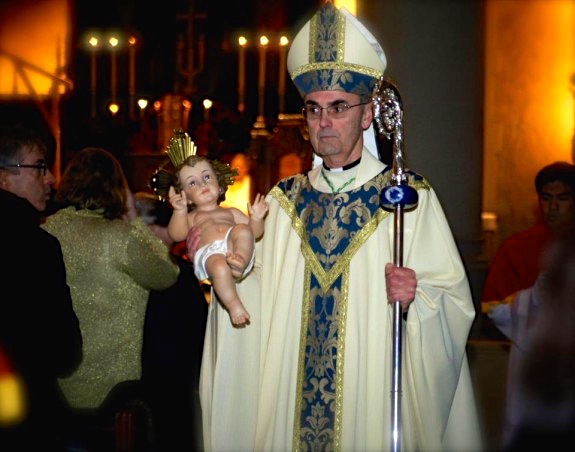 My pastor, Bishop Paul Sanchez, at Midnight Mass at our parish, Our Lady Queen of Martyrs in Forest Hills, NY in 2013. (photo: Rosalind Chan)

It’s happening in the United States—I know of more and more places that are offering “Midnight Mass” a few hours earlier—and it’s a phenomenon that has taken hold in the UK, as well.

With the church ablaze with candles, the Christ child in the crib and the choir singing their carols in perfect harmony, Midnight Mass is at the heart of Christmas. But according to a Tablet survey, it is on its way to becoming a thing of the past.

Priests at more than 50 deaneries – groups of parishes – across England and Wales contacted this week confirmed that there has been a decline in the number of churches offering a Mass that ushers in Christmas Day on the stroke of midnight. In some pastoral areas it will not be offered at all, while in many the first Mass of the nativity is now scheduled for as early as 5 p.m. on Christmas Eve.

Though cherished by many Catholics, various issues have militated against the 1,500-year-old tradition. Many priests report problems with drunks infiltrating services that begin just as the pubs close – one parish even reported a streaker.

Aging congregations have also made earlier Masses more popular; and the declining number of priests, and subsequent reorganisation of parishes, mean that increasingly Midnight Mass is only celebrated in one parish per deanery.

Mgr David Hogan, parish priest of St Bernadette’s, in Nunthorpe, Middlesbrough, estimated that fewer than 25 per cent of parishes now offer Midnight Mass. “Last time we had it, we ended up with a drunk trying to get the doors off the church,” he said. “So we’ve made the decision not to have Mass when people are pouring out of the pubs sloshed.”

My parish continues to offer the traditional Mass at midnight, with a special children’s liturgy — which is wildly popular with families— a 5 p.m. on Christmas Eve.

Many places, I understand, are finding it harder to get people (especially the elderly and families with young children) to come out for Mass late in the evening, so they’re scheduling it earlier, usually at 9 or 10 p.m.

It might be worth noting, too: “Midnight Mass” with the pope is actually at 10 p.m., Rome time.

UPDATE: Several people mentioned this on Facebook, and it seems worth mentioning here: the Roman Missal lists only a “Mass at Night” for the Christmas liturgies, not a “Midnight Mass.”  It could be held anytime after sunset.

So where did the custom of Midnight Mass begin?

Some answers, from the Catholic Encyclopedia:

Christmas Day actually has three separate Masses that are or can be held, in addition to the vigil – at midnight, at dawn, and during the day. It is not known exactly how the tradition of the three Masses originated, as even the origin of the feast of Christmas itself isn’t certain – depending on the city, something resembling a Christmas celebration started in different years (and at varying times of the year, as well). By the end of the fourth century it was almost universally held on December 25, with Rome having started celebrating it on that date before 354, and Constantinople not before 379. The celebration of Epiphany on January 6 had previously been the major Christmas-like celebration, but once December 25 became the widely agreed-upon date of Christmas the celebrations moved to that date as well.

In the 380s, a Christian woman named Egeria made a pilgrimage to Jerusalem, observing for three years and keeping a journal of the customs and liturgies she saw there. She witnessed the Christians celebrating the birth of Christ on January 6, since it appears the tradition of celebrating Christmas on December 25 had not yet begun there, beginning with a midnight vigil in Bethlehem, which was followed by a torchlight procession to Jerusalem culminating with a gathering in Jerusalem at dawn. When the basilica of St. Mary Major was built in Rome around 430, Pope Sixtus III included a replica chapel of the Bethlehem cave where Jesus was born, and much like had been the practice in Jerusalem when Egeria visited, he instituted the celebration of a midnight Mass in this chapel.

Around 550 AD, the Pope began to celebrate a Mass in the Church of St. Anastasia before dawn on Christmas Day, initially because the feast of St. Anastasia was celebrated on December 25. Eventually, though, this evolved into a second Christmas Mass that seemed to replicate the dawn celebrations that Egeria witnessed in Jerusalem. This Christmas Mass would be followed by the Pope going to St. Peter’s to celebrate the dawn office of Christmas with the faithful. Until sometime before 1156, only Popes were allowed to celebrate the three Christmas Masses, but by 1156 there is evidence that priests began to say all three as well, which still occurs today. A single priest can celebrate all three Christmas Day Masses, provided they follow the correct times (midnight, dawn, and sometime during the day). The midnight Mass is different from Christmas vigil Masses held earlier in the evening of Christmas Eve. Any of the four types of Christmas Masses (vigil, midnight, dawn, or day) is valid for fulfilling the Christmas Mass obligation.

December 19, 2014 Pope Francis: "Sports are at home in the Church"
Browse Our Archives
Related posts from The Deacon's Bench