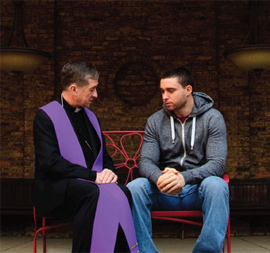 I’ll be curious to hear how this event went.

From 12 noon yesterday (Friday 27th) until midday today (Saturday 28th) local time, the doors of many Catholic churches in Chicago will be open to all those seeking forgiveness, mercy and consolation through prayer. The “Festival of Forgiveness”, promoted by the Archbishop of Chicago Blase Cupich, is taking place on the second weekend of Lent. This pastoral initiative is a first for the diocese, with chapels, sanctuaries and parishes getting involved. Dozens of priests will welcome anyone who wishes to approach the sacrament of Confession, receive a blessing and recite prayers of healing. Archbishop Cupich – local media announce – will be available for many hours in the Holy Name Cathedral in Chicago to confess, encourage, bless and pray with faithful of his diocese .

In the statements issued by the Archdiocese, the initiative is explicitly presented as a response to Pope Francis’ call. He described the Catholic Church as a “field hospital” in a world full of wounded people. The Church itself is made up of wounded people and sinners but it is also an “instrument” that facilitates everyone’s encounter with grace, forgiveness and the healing mercy of Christ.

The diocesan initiative is aimed first and foremost at Catholics, particularly those who have not received the sacraments for a long time. They are the first who are “cordially invited to come and receive the mercy of God”. But the call to experience grace, is by nature open to everyone, it is not an exclusive invitation. The website of the Church in the US’s third largest city in terms of number of inhabitants says: “Every human being lives with elements of brokenness. Every human soul knows its fragility,” the archdiocese said in promoting the festival on its website.

March 1, 2015
Boom: with seminarian numbers surging, one diocese launches a capital campaign to support them
Next Post

March 1, 2015 What does it take to be a good shepherd?
Browse Our Archives
Follow Us!

A Skeptic's Guide to Fasting for Relief from...
I am a Christian who questions everything. Every day, in every moment,...
view all Catholic blogs
Copyright 2008-2020, Patheos. All rights reserved.