Reconciliation, from the priest’s point of view 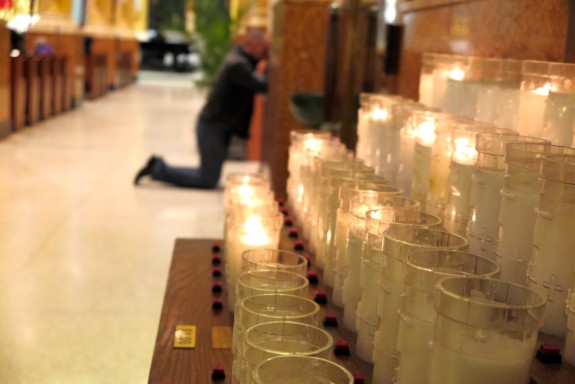 Yesterday, I posted about my visit to a church in midtown Manhattan to receive the Sacrament of Reconciliation.

Today, my blog neighbor Fr. Michael Duffy tells the story from the other side of the screen:

I walked into the church at ten to three and already fifty people were waiting.  I went into the priest’s sacristy, took my coat off and put on my surplice and violet stole.  Walking into the church I could feel the eyes of everyone in the church looking at me, wondering where I would go to begin hearing confessions and offering absolution.  First though, I had to turn the lights on then the sound system so the Gregorian chant could fill the church for the next six hours.

The four other priests began entering the church, taking their places and the lines automatically formed for each of them.  Once the lines formed, they didn’t end for four hours.  Five priests, each with lines 20 people deep.

Two priests were supposed to take a dinner break at 5 for 60 minutes and the other two at 6 for 60 minutes.  So long were the lines that the first chance for a priest to even move from their station wasn’t until 7:15.  I didn’t move until 8.  We each took 30 minutes for a quick dinner and then returned to continue hearing confessions until 9:30.

Been to confession yet? Go!

March 31, 2015
Spa-like abortion clinic to open outside Washington
Next Post

March 31, 2015 Before Holy Thursday, there is Spy Wednesday
Browse Our Archives
Follow Us!

Invocation of Saints and Angels (vs. Jason Engwer)
Luke 16 (Lazarus & the Rich Man & Abraham) is One of...
view all Catholic blogs
Copyright 2008-2020, Patheos. All rights reserved.