Michigan priest urges parishioners to arm themselves: “We’re not in Mayberry anymore, Toto”

From The Detroit Free Press:

An Ann Arbor Catholic priest has urged his parishioners to arm themselves and attend classes at Christ the King parish to earn a concealed pistol license (CPL). 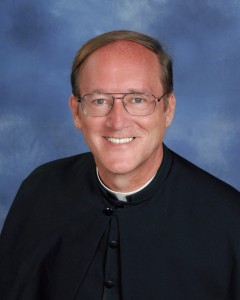 In a letter sent to Christ the King parishioners recently, the Rev. Edward Fride explained why he believed it was necessary to get concealed pistol licenses because of recent crime in the area. During a Palm Sunday mass last month, Fride announced that the parish would be holding the CPL class.

When some parishioners questioned the decision, Fride sent out a pro-gun letter titled “We’re not in Mayberry Anymore, Toto” – a reference to the 1960s-era Andy Griffiths Show and its portrayal of a fictional North Carolina town, as well as Dorothy’s dog from the Wizard of Oz.

“It is very common for Christians to simply assume that they live in Mayberry, trusting that because they know the Lord Jesus, everything will always be fine and nothing bad can happen to them and their families,” Fride wrote.

“How to balance faith, reality, prudence, and trust is one of those critical questions that we struggle with all our lives. Pretending we are in Mayberry, while we are clearly not, can have very negative consequences for ourselves and those we love, especially those we have a responsibility to protect. If we are not in Mayberry, is there a real threat?”

Fride told parishioners in the letter that Catholic teachings do not preclude carrying a gun for self-defense and to defend others. Fride then asserted that crime is up and that because of budget cuts, “there has been a significant reduction in the availability of an armed police response.”

Fride could not be reached for comment Monday. But Michael Diebold, a spokesman for the Diocese of Lansing which oversees the Ann Arbor parish, confirmed Monday that the controversial letter had been sent.

“Yes, it appears that ‘We’re Not in Mayberry Anymore, Toto!’ was sent out to the parishioners of Christ the King by their pastor, Fr. Ed Fride,” Diebold wrote in an email to the Free Press.

The bulletin for Christ the King, meantime, has this announcement:

CTK is offering an 8-hour CPL (concealed pistol license) class for its parishioners. The class includes instruction by NRA and law enforcement personnel, range time, use of guns and ammo, andNRA certificate. The cost is $125 per person (K of C cost is $110). Register early as class size is limited. Choose one of the following dates to attend: April 18, April 25, May 2. Class will be held from 9am-5pm. Classroom instruction will take place in Parish Center Room 3. After the classroom portion, students will go to the range.

A couple years ago, CNS looked at the issue of guns and Catholic teaching:

The Catholic Church’s position on gun control is not easy to find; there are dozens of speeches and talks and a few documents that call for much tighter regulation of the global arms trade, but what about private gun ownership?The answer is resoundingly clear: Firearms in the hands of civilians should be strictly limited and eventually completely eliminated.But you won’t find that statement in a headline or a document subheading. It’s almost hidden in a footnote in a document on crime by the U.S. bishops’ conference and it’s mentioned in passing in dozens of official Vatican texts on the global arms trade.The most direct statement comes in the bishops’ “Responsibility, Rehabilitation and Restoration: A Catholic Perspective on Crime and Criminal Justice” from November 2000.“As bishops, we support measures that control the sale and use of firearms and make them safer — especially efforts that prevent their unsupervised use by children or anyone other than the owner — and we reiterate our call for sensible regulation of handguns.”That’s followed by a footnote that states: “However, we believe that in the long run and with few exceptions — i.e. police officers, military use — handguns should be eliminated from our society.”That in turn reiterates a line in the bishops’ 1990 pastoral statement on substance abuse, which called “for effective and courageous action to control handguns, leading to their eventual elimination from our society.”On the world stage, the Vatican has been pushing for decades for limitations not just on conventional weapons of warfare, such as tanks and missiles, but also for stricter limitations on the illegal and legal sale, trade and use of small firearms and weapons, said Tommaso Di Ruzza, the expert on disarmament and arms control at the Pontifical Council for Justice and Peace.Di Ruzza told Catholic News Service that the Vatican is one of just a handful of states that would like to see small arms and weapons included in the U.N. Arms Trade Treaty, which would better regulate the flow of conventional arms.He said while many countries are open to limits on larger weapons systems, most nations aren’t interested in regulating small arms even though they “cause more deaths than all other arms (conventional and non-conventional) together.”The Vatican’s justice and peace council is working to update its 1994 document, “The International Arms Trade,” to further emphasize the importance of enacting concrete controls on handguns and light weapons, he said.

April 20, 2015
"Catholics appalled by what is happening in the Middle East do not have to feel powerless"
Next Post

April 20, 2015 "Banns for the diaconate"?
Browse Our Archives
Related posts from The Deacon's Bench