You probably remember this headline-grabber from January.

The controversial pastor of a Catholic elementary school in San Francisco has been removed from his post, though some parents remain concerned that the change is only temporary.

The announcement came late last month that a new chaplain was appointed to oversee the Star of the Sea Elementary in place of Rev. Joseph Illo and Rev. Patrick Driscoll, said Christy Brooks, a parent of two sons at the Richmond district school.

“The only way we’re going to be satisfied is if we have a guarantee [that] over the course of our children’s lifetimes at Star of the Sea, Father Illo and Father Driscoll will not [be involved],” Brooks said.

Illo, the school’s pastor since last summer, came under fire in recent months after he announced a new policy to no longer train girls as altar servers and later distributed sexually explicit pamphlets to children before confession, the latter of which he apologized for.

The San Francisco Gate has more:

“Father Vito showed up and the first thing he did was schedule 40-minute appointments with every parent,” said Christy Brooks, who has a sixth and a fourth grader at the school. “He’s a wonderful human being and a wonderful spiritual teacher.”

So all is well? Not so fast. Illo continues to be a polarizing figure and is still attempting to walk back some of his more incendiary comments. In an interview with the Catholic World Report he said his decision not to allow girls to be altar servers was, “a poke in the eye of liberal San Francisco.” He said changes at the Star of the Sea were part of a “purge.”

And, in preparing to come to San Francisco he wrote in a February 2014 blog post that he was about to enter the “ beautiful but savagely distorted cultural maelstrom that is the ‘Baghdad by the Bay.’”

“Before he ever arrived he was blogging about purging the parish,” said Brooks. “It was just name-calling in the simplest form. He insulted and accused us and he did not even know us.”

Illo appeared to get the message. His letter last week talks about how “I understand how important that it is that we develop a better working relationship moving forward.”

And, he added in respect to the all-male altar server controversy that, “I deeply regret the upset this issue has called us all.”

The reports indicate he will no longer be the school chaplain. It appears he will stay on as parish administrator.

UPDATE: Another take on this appointment—hailing it as “Solomonic”—can be found here.

Photo from St. Mary Star of the Sea website

May 21, 2015
Iraqi Christians speak: "They wanted us to know they were believers"
Next Post 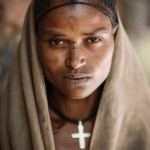 Temple Visions: The Lord Is Calling Each Of...
"In the year that King Uzziah died, I saw the Lord sitting...
view all Catholic blogs
Copyright 2008-2020, Patheos. All rights reserved.