Pope: beware worldly pastors, “Christians who talk too much”

Recalling the day’s Gospel reading in which the people marvel at Jesus’s authoritative teaching, Pope Francis said that people today know “when a priest, a bishop, a catechist, a Christian, has the consistency that gives him authority.” Jesus, he said, “admonishes his disciples” to beware of “false prophets.”

But how to discern the true preachers of the Gospel from the false ones?

Pope Francis said there are three things to look for:  how do they speak, what do they do and, do they listen?

“They talk, they do, but another attitude is lacking: that is the basis, which is the very foundation of speaking, of doing.  They lack the ability to listen.”

But, the pope said,  “the combination of speaking-doing is not enough … “ and can often be deceptive.  What Jesus expects of us instead, he said, is to “listen and do – to put into practice:” ‘Everyone who hears these words of mine and puts them into practice,’ Jesus said, ‘is like a wise man who built his house upon a rock.’

Instead, Pope Francis asserted, those who “hear the words but fail to make them their own…do not listen seriously or fail to put them into practice will be like the one who builds his house on the sand.”

“When Jesus warns people to beware of ‘false prophets’, he says: ‘By their fruits ye shall know them’. And here, by their attitude: so many words, they speak, they do wonders, do great things but they do not have an open heart to hear the Word of God; they are afraid of the silence of the word of God and these are the ‘pseudo Christians’, the ‘pseudo pastors ‘. It’s true, they do good things, it is true, but they lack the rock. “

What such people are lacking, the Pope continued, is “the rock of the love of God, the rock of the Word of God.” And without this rock, he warned, “they can’t preach, they cannot build: they pretend [and] in the end everything collapses.”

These are the  “pseudo pastors,” the “worldly pastors…or Christians also, who talk too much,” the Pope added.  “They are afraid of silence;  maybe they do too much.” And, the Pope insisted,  they are not capable of embracing what they’ve heard – [they like the sound of their own voices] – and this does not come from God.” 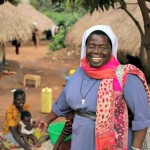 June 25, 2015 A great dinner companion—in every sense
Browse Our Archives
get the latest from
Catholic
Sign up for our newsletter
POPULAR AT PATHEOS Catholic
1

Newburg Landing
We went to Toronto. Not the one in Canada, but the one...
view all Catholic blogs
Copyright 2008-2021, Patheos. All rights reserved.