A great dinner companion—in every sense 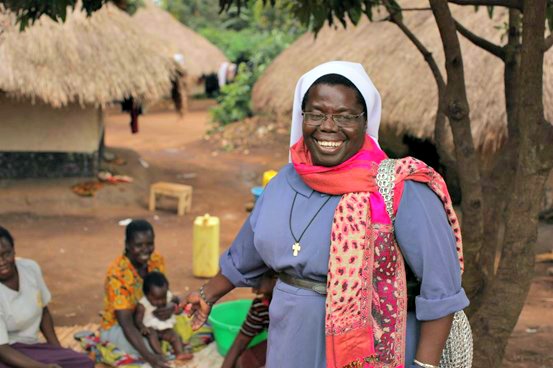 It isn’t every day you get to dine with one of the most influential people in the world.

Last night, I had the privilege of doing just that: sitting at the same table for dinner with Sister Rosemary Nyirumbe.

If you don’t know Sister Rosemary, you should.

In Gulu, Uganda, Sister Rosemary has made it her mission to provide within an orphanage a home, a shelter for women and girls whose lives have been shattered by violence, rape and sexual exploitation.

At the Saint Monica Girls’ Tailoring Center she runs, those women can become themselves again, thanks to the security and comfort they feel — a tremendous accomplishment in a country still fragile from years of civil war. But what truly fascinates the people who have the privilege to meet with Sister Rosemary — as I did when I narrated a film about her, Sewing Hope — is her magnetic and contagious energy.

For girls who were forcibly enlisted as child soldiers, Sister Rosemary has the power to rekindle a bright light in eyes long gone blank. For women with unwanted children born out of conflict, she allows them to become loving mothers at last.

The traumas she heals are unfathomable, but the reach of her love is boundless.

For the last 30 years, Sister Rosemary of the Sisters of the Sacred Heart of Jesus based in Juba, South Sudan, has answered the call to serve the least among us from the epicenter of a bloody and violent civil wars that decimated northern Uganda and South Sudan.

Armed with only a sewing machine, Sister Rosemary openly defied Joseph Kony and the rebel soldiers and commanders of the Lord’s Resistance Army in their 20-year reign of terror. Since 2002, Sister Rosemary has enrolled more than 2,000 girls who had been previously abducted by the LRA or abandoned by their families.

Anyone who steps foot on the grounds of the Saint Monica campus in Gulu, Uganda, will instantly recognize there are few other places on earth where a community of women learn to become self-reliant and change agents for peace and prosperity. Sister Rosemary has taught these brave girls to make their own clothes, grow their own food, learn a valuable trade, and show mercy to others that are less fortunate.

And here’s a video about her work:

Sister Rosemary is a dynamo—the kind of person who can, by sheer force of will, change the world. There aren’t enough like her today. It was an honor to meet her and break bread with her.

She is delivering the keynote speech at the Catholic Media Conference this afternoon. I’m looking forward to it. 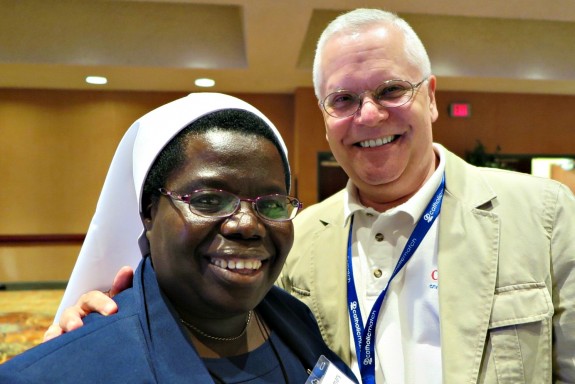 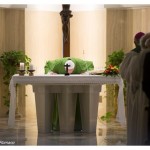 June 25, 2015
Pope: beware worldly pastors, "Christians who talk too much"
Next Post

June 25, 2015 What can Billy Graham teach us about preaching?
Browse Our Archives
get the latest from
Catholic
Sign up for our newsletter
POPULAR AT PATHEOS Catholic
1

What are people starving for, Fr....
Catholic Bard
Books by This Author Books by Deacon Greg Kandra