Brooklyn is in the house: a change at the top at CNEWA

I’m getting a new boss. The announcement:

Cardinal Timothy M. Dolan of New York, Chair and Treasurer of the Board of Trustees of Catholic Near East Welfare Association/Pontifical Mission for Palestine, has announced the Holy See has approved the nomination and election of Msgr. Peter Vaccari to succeed Msgr. John E. Kozar as president of CNEWA/PMP. Msgr. Vaccari will initiate the process of transition as vice president on January 1, 2020. At a date yet to be determined, but in the near future, Msgr. Kozar will retire and concurrently Msgr. Vaccari will assume his responsibilities as president of CNEWA/PMP.

In a staff meeting in New York on Tuesday announcing the move, Cardinal Dolan said that Msgr. Kozar had approached him nearly a year ago to discuss a successor, noting he was going to be turning 75 in 2020 and wanted a smooth transition.

The cardinal expressed his gratitude to Msgr. Kozar for initiating the process — and also expressed his personal affection for him and the work he has done with CNEWA/PMP over the last eight years. The cardinal reminded the CNEWA family of his high regard for the agency and its work since his days serving the apostolic nunciature in Washington, D.C., then led by Archbishop Pio Laghi. Archbishop Laghi served in Jerusalem under St. Paul VI and was a great supporter of CNEWA and its work in the Middle East.

Msgr. Kozar, a priest of the Diocese of Pittsburgh, began his tenure as president of CNEWA/PMP in September 2011, after having served as National Director of the Pontifical Mission Societies for ten years. “A diocesan priest on loan to the missions,” Msgr. Kozar has encouraged the Eastern Catholic churches — which CNEWA is privileged to serve — as these communities continue in their renewal called for by the fathers of the Second Vatican Council.

”As I travel throughout CNEWA’s world, the men and women of these rich communities of faith demonstrate the church at her best, whether by wiping tears from the eyes of abandoned pensioners or in offering the Bread of Life to refugees in a camp.”

Msgr. Kozar and Msgr. Vaccari reminded the CNEWA staff that they share a deep and long-lasting friendship, built over many years of traveling together to the Middle East on pilgrimage, and they look forward to working together during this period of transition of leadership.

I’ve known Msgr. Vaccari for a number of years, and I can affirm: this is great news. Msgr. Vaccari is a wonderful priest and a man who is much beloved at the seminary.

But more importantly: It will be nice to have another Brooklyn boy around the office.

UPDATE: From NET, the diocesan cable channel in Brooklyn, a video report about the change: 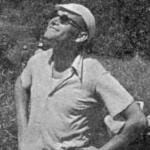 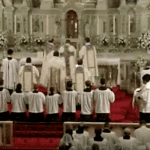 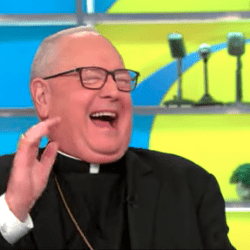