The story behind the cappa magna

The story behind the cappa magna June 9, 2015 Deacon Greg Kandra 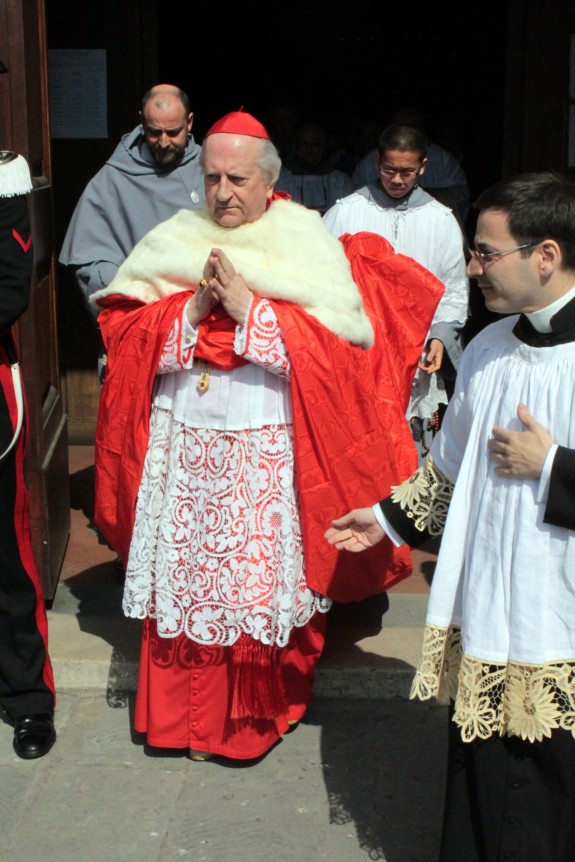 Every now and then, a sharp-eyed observer armed with a camera and a pair of binoculars treks into the wild, sets up a base camp and waits patiently for the arrival of a creature both rare and exotic—and perhaps, to some bird-watchers, comical.

This seems to be what has happened, once again, with a recent piece in Crux—which, as Terry Mattingly has noted, treats Catholics devoted to tradition with a detached curiosity you normally only find in the pages of National Geographic. And it’s caused people to sit up and take notice of the image accompanying the Crux piece, and the one that illustrates the Get Religion posting: Roman Catholic cardinals (most notably, Cardinal Raymond Burke) sporting the cappa magna.

Well. It might be useful to understand the background behind this vestment.

The good people at Wikipedia, citing the Catholic Encyclopedia, explain:

The cappa magna (literally, “great cape”), a form of mantle, is a voluminous ecclesiastical vestment with a long train, proper to cardinals, bishops, and certain other honorary prelates. It is however a jurisdictional garment.

The cappa magna is not strictly a liturgical vestment, but only a glorified cappa choralis, or choir cope. That is to say, it is not used when vested as a celebrant at a liturgical service. It is worn in processions or “in choir” (i.e., attending but not celebrating services). Its colour for cardinals is ordinarily red and for bishops violet. Cardinals and papal nuncios are entitled to wear a cappa magna of watered silk.

The cappa magna is ample in volume and provided with a long train and a disproportionately large hood, the lining of the hood is ermine in winter and silk in summer, and was made in such a way as to completely cover not only the back, but also the breast and shoulders. The hood is functional and in earlier times was often placed on the head and covered with the galero. This used to be the custom when the pope created a new cardinal at a consistory. Nowadays, the hood is normally worn over the head only during penitential rites. Previously, cardinals who were members of specific religious orderswould wear a cappa magna in the color of their order. Nowadays, all cardinals wear red.

The motu proprio Valde solliciti of 30 November 1952 ordered that the train of the cappa magna should be shortened by about half (from 15 metres to 7).The 1969 Instruction on the Dress, Titles and Coats-of-arms of Cardinals, Bishops and Lesser Prelates laid down that:

The cappa magna, always without ermine, is no longer obligatory; it can be used only outside of Rome, in circumstances of very special solemnity. (§ 12)

Since then, the cappa magna is hardly ever used except in celebrations according to the pre-1969 liturgical books, as it was used for the ordination of deacons of the Institute of Christ the King Sovereign Priest in 2009.

What may be more significant, though, is the liturgical and theological symbolism behind the cappa magna.

A few years ago, after Bishop Edward James Slattery of Tulsa wore one for a Mass in Washington, a couple people wrote in to America magazine. The comments were not complimentary. This prompted Msgr. Patrick Brankin, the director of communications for Tulsa, to reply. In a letter reprinted in the National Catholic Reporter, he wrote:

Please allow me to respond to two letters that appeared in your May 31 issue concerning the liturgical use of the cappa magna at the solemn pontifical Mass celebrated by Bishop Slattery in Washington, D.C.

Bishop Slattery has received close to 2,000 letters and e-mail messages from 13 countries around the world commenting on the prayerfulness of that Mass and the depth of comfort the faithful found in his homily.

The cappa magna does indeed represent the finery of the world, its power and prestige. That is why after his entrance wearing it, the prelate is publicly stripped of this finery and humbled before the congregation. Then, vestment by vestment, the bishop is clothed in the new man of which St. Paul speaks, including the baptismal alb, the dalmatic of charity, the stole of pardon and the chasuble of mercy. When finally clothed in Christ, the prelate makes a second entrance into the church to begin the eucharistic celebration in persona Christi, the visible head of the body, the church.

It was a clear statement that the power and prestige of the world have no place at the altar, but it is expressed in a liturgical ritual or symbol, which, unfortunately, are often lacking in the contemporary rites and thus hard to grasp.

Interesting points, all. And in that context, it makes some sense.

I have to say, I’ve never seen the cappa magna in real life myself; like most contemporary Catholics, it’s something I’ve only spotted in pictures. But I have to wonder if, in this day and age, it has outlived its usefulness.

I would be hard-pressed to imagine someone like Pope Francis—he, of the frayed sleeve and scuffed shoes—wearing this sort of vestment. And I think most modern cardinals and bishops would elect to don something simpler, even for big events. If the pontiff believes bishops should smell like their sheep, it might be a challenge to find sheep who smell of watered silk. (A deacon on Facebook put it simply:  “I will always fail to see how it reflects the One who was carpenter turned preacher and healer. Could anything be farther from His simple garments?”)

And, after all: in our image-saturated age, the image the cappa magna conveys today may not be what was originally intended.

Love it or hate it, no one can deny: it definitely makes a statement.

For the full cappa effect, check out the video below, from the Mass featuring Bishop Slattery:

June 8, 2015
Is the priest shortage a “manufactured crisis”?
Next Post

June 9, 2015 Ordination update: 21 new deacons for Philadelphia
Browse Our Archives
get the latest from
Catholic
Sign up for our newsletter
POPULAR AT PATHEOS Catholic
1