Francis isn’t the first pope to speak out about the environment—though he is the first to pen an encyclical devoted to the topic. And it turns out, his views aren’t that different from his predecessors.

So, a quick quiz. Which pope said which quote?  John Paul, Benedict or Francis?

1.“Preservation of the environment, promotion of sustainable development and particular attention to climate change are matters of grave concern for the entire human family.”

2. Respect for creation stems from respect for human life and dignity. It is on the basis of our recognition that the world is created by God that we can discern an objective moral order within which to articulate a code of environmental ethics. In this perspective, Christians and all other believers have a specific role to play in proclaiming moral values and in educating people in ecological awareness, which is none other than responsibility towards self, towards others, towards creation.”

3. “We must regain the conviction that we need one another, that we have a shared responsibility for others and the world, and that being good and decent are worth it.”

1. Pope Benedict, Letter to the Ecumenical Patriarch of Constantinople on the Occasion of the Seventh Symposium of the Religion, Science and the Environment Movement, September 1, 2007. 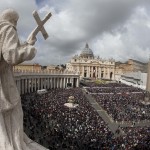 June 18, 2015
This must be a first: Vatican releases video linked to encyclical
Next Post

June 19, 2015 What they've said: a brief roundup of reaction to Laudato Si'
Browse Our Archives
get the latest from
Catholic
Sign up for our newsletter
POPULAR AT PATHEOS Catholic
1