A priest faces death with faith: “I became a Jesuit to save souls, including my own”

A priest faces death with faith: “I became a Jesuit to save souls, including my own” August 27, 2015 Deacon Greg Kandra

From The Milwaukee Journal-Sentinel:

Since being diagnosed with inoperable pancreatic cancer in late January, the Rev. John Schlegel has given away most of his books, artwork and clothes. 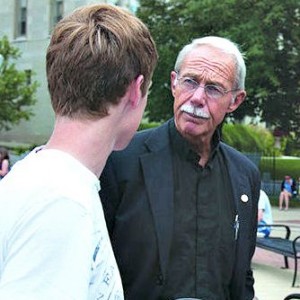 And he has planned his funeral right down to the songs that will be sung and the obituary that will appear in the program.

But do not be misled, do not fear for a man of faith who is methodically putting his affairs in order and reaching out to friends gathered during a lifetime of serving others, serving the Catholic Church.

Schlegel, 72, is not waiting for death. The pastor of the Church of the Gesu in Milwaukee is embracing life.

“The Irish have it all wrong,” he said. “The corpse should have a drink. He should be able to sit around and hear what the eulogies are going to be.”

Schlegel, a former president at the University of San Francisco and Creighton University, has been very public with his illness and decision not to undergo chemotherapy.

“I do not believe the chemo would advance the quality of my life in any significant way,” he wrote in a letter to friends and family.

Prayers from parishioners, friends and family have sustained him, kept him resolute in his faith. The decision to go public with his illness was a difficult one, he said, but he had to do it because people would have eventually noticed his physical deterioration.

“I like to say I became a Jesuit to save souls, including my own,” he said, sitting in a pew at Gesu, dressed in a blue sport coat, blue shirt and gray slacks. He wore a Jesuit pin, Ignatius of Loyola, in his coat lapel and a Do-Not-Resucitate medical bracelet on his right wrist.

Schlegel’s grace in facing his illness has touched a wide community of former students, colleagues and longtime friends.

Announcing his diagnosis in a letter to Creighton students and staff in January, he wrote:

“I have taught you [and you me], married you, baptized your children, buried your loved ones and picked your pockets; at the same time we skied, hiked, golfed, played racquetball, cooked, listened to opera and drank wine. God is indeed a gracious and generous God.

“Because of you I do not fear death.”

Remember this priest—and so many like him—in your prayers.

August 27, 2015 St. Monica, pray for us
Browse Our Archives
get the latest from
Catholic
Sign up for our newsletter
POPULAR AT PATHEOS Catholic
1