What happened when an Orthodox Jewish woman met the pope

She couldn’t bow to him. So he bowed to her.

The pontiff has drawn the attention of the ultra-Orthodox Jewish community, after bowing to Israeli President Reuven Rivlin’s bureau chief.

Various Orthodox blogs released an image of the papal bow on Sunday, from Rivlin’s trip to Rome last week. According to the reports, when it came time for Rivlin’s trusted assistant, Rivkah Ravitz, to meet the Pope, she declined the traditional handshake, explaining that for religious reasons (adhering to strict codes according to which men and women who are not married to each other may not touch), she would not be able to reciprocate.

Nor, she said, could she bow to the pontiff, because he was adorned with a cross.

Pope Francis immediately recognized the situation and, diffusing all awkwardness with deft extemporization, covered his cross and bowed to Ravitz instead.

Visit the link to see the picture. 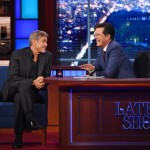 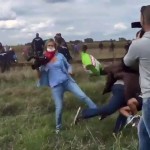 September 9, 2015 Great moments in journalism: camerawoman trips fleeing refugees
Browse Our Archives
get the latest from
Catholic
Sign up for our newsletter
POPULAR AT PATHEOS Catholic
1