The video says it all:

That little stunt cost her her job:

A Hungarian camerawoman has been fired after she tripped refugees who were fleeing from police, her employer announced Tuesday.

The incident, which was captured on video by a German correspondent Stephan Richter, occurred as dozens of refugees attempted to flee an overcrowded camp near the Hungarian-Serbian border, the WashingtonPost reports. Around the 15-second mark, the camerawoman, who was working for Hungarian broadcaster N1TV, appears to trip a man holding a child as she films the scene.

“Today, a N1TV colleague behaved unacceptably at the Roeszke reception center. The cameraman’s employment was terminated with immediate effect,” the TV station said in a statement, which did not identify the employee by name.

September 9, 2015
What happened when an Orthodox Jewish woman met the pope
Next Post 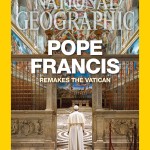 September 9, 2015 End of an era: National Geographic magazine ends non-profit status, partners with Fox
Browse Our Archives
get the latest from
Catholic
Sign up for our newsletter
POPULAR AT PATHEOS Catholic
1

The Problem of the Trump Rally...
Steel Magnificat
Books by This Author Books by Deacon Greg Kandra

The Seed Of The Kingdom
After the Resurrection, after the Ascension, after Pentecost, the church continues Christ’s...
view all Catholic blogs
Copyright 2008-2020, Patheos. All rights reserved.