Pew Research Center: Most U.S. Catholics disagree with Church teaching on what is sinful, want changes in Communion rules

Most U.S. Catholics (62%) think the church should allow Catholics who have been divorced and remarried without an annulment to receive Communion, according to a recent Pew Research Center survey. And only about a third of American Catholics (35%) say they personally think getting remarried after a divorce without an annulment is sinful, compared with half (49%) who say it is not a sin. Only 21% of Catholics say simply getting a divorce is sinful, while 61% say it is not.

These views may be informed by the fact that many Catholics have had these experiences. A quarter of American Catholic adults (25%) have been divorced themselves, and roughly a third (9% of all Catholic adults) are currently remarried. Among all U.S. Catholics who have ever been divorced, only about a quarter (26%) say they or their former spouse have sought an annulment from the Catholic Church.

The survey also indicates less than half of U.S. Catholics believe using contraceptives or engaging in homosexual behavior is sinful. Read it all. 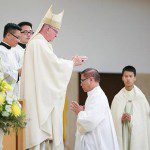 October 27, 2015 Can you stomach this?
Browse Our Archives
get the latest from
Catholic
Sign up for our newsletter
POPULAR AT PATHEOS Catholic
1