Saved by a Prayer: What Happened When an Armed Gunman Disrupted a Church Service

Pitting prayers against bullets, an armed intrusion at a church on New Year’s Eve ended in peace.

At a eastern North Carolina congregation Thursday night, an emotionally distraught man walked in with a rifle in one hand and ammunition in the other. But it did not turn into a scene of terror. Instead, hugs and prayers ensued, and the man stayed for the rest of the service before being taken into custody by police.

Pastor Larry Wright, city councilman and the head of the Heal the Land Outreach Ministries in Fayetteville, N.C., had been delivering a sermon on violence in his community when the armed man entered the church.

He appeared to be in his late 20s or early 30s, and with his rifle pointed upward, he walked towards the pulpit. When Pastor Wright, a retired army sergeant, realized the weapon and the ammunition were real, he stepped down and approached the man.

Before he could open fire, the pastor approached him.

“Can I help you?’’ he asked him, as reported by the Fayetteville Observer.

…The man, whom the police has yet to identify, remained calm. He asked for Wright to pray for him and shared his story. He was recently released from prison.

Wright proceeded to take his rifle and handed it to a deacon. Three other deacons came forward, and the four hugged the man.

“And then I began to minister to him and pray to him and talk with him,” Wright said. The man fell to his knees and broke into tears. He was invited to stay for the rest of the service in the front pew. When police arrived to the scene, they were asked to remain outside until service ended. Police Department spokesman Lt. David McLaurin told the Observer that he was voluntarily admitted to a nearby hospital afterwards. 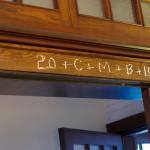 January 3, 2016
Chalking the Door: Blessing Your Home for Epiphany
Next Post 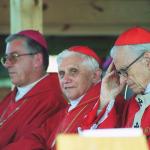