A Jesus for Our Times: The Story Behind “Homeless Jesus”

A Jesus for Our Times: The Story Behind “Homeless Jesus” April 10, 2016 Deacon Greg Kandra

“Homeless Jesus” is homeless no more. You find him everywhere.

One of the most audacious and surprising depictions of Christ—and one of the most controversial, as well—this sculpture has captured the imagination of people around the world. First created in 2013 by Canadian sculptor Timothy Schmalz, the life-sized bronze statue has challenged both believers and non-believers alike to think of Christ and poverty in a new way—one that is both instantly recognizable and instantly unsettling.

The statue depicts a homeless man under a blanket, his face and body covered, except for his bare feet. He could be anyone—until you notice his feet carry the marks of the crucifixion.

Significantly, the Jesus on the bench has a little extra room. The bench is just large enough for someone to sit by the feet of Christ.

Now, the opportunity to do just that is spreading. A number of churches have embraced this image of Christ, and copies of “Homeless Jesus” are popping up around the world.

He is there, outside St. Alban’s Episcopal Church, in Davidson, North Carolina, where residents were so alarmed when they saw the figure lying on a bench covered by a blanket, that they called the police. As a Davidson native noted: “One neighbor wrote a letter to the editor, saying it creeps him out.”

“Homeless Jesus” also has a home at an intersection in Indianapolis, where a woman was so concerned about the huddled man under the blanket that she called paramedics.

He is in Detroit, outside St. Peter and Paul Catholic Church, where some faithful are often moved to leave flowers or notes. “We hope it elevates people’s awareness of those in need,” said the parish administrator, the Rev. Gary Wright.

Versions of “Homeless Jesus” can also be found in Toronto, Washington, D.C., Dublin, Chicago, and Madrid, among other places.

And now you can even find him at the Vatican, outside the office of the Papal Almoner. The statue, installed last month, is similar to one blessed by Pope Francis in 2013.

“When the Pope saw it,” Schmalz said at the time, “he touched the knees and feet and prayed.” The artist feels this work has special significance for Francis. “Pope Francis is doing just that,” he said, “reaching out and approaching the marginalized.”

For all the work’s popularity, it has also faced criticism.

Read on to learn why. 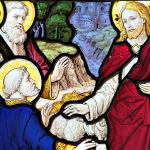 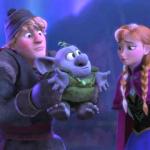 April 10, 2016 "Amoris Laetitia" in three minutes, courtesy Disney's "Frozen"
Recent Comments
0 | Leave a Comment
Browse Our Archives
get the latest from
Catholic
Sign up for our newsletter
POPULAR AT PATHEOS Catholic
1

When You Can't Feel Grace From the Sacraments
Unlike make Catholics, I have always loved going to Confession. I love...
view all Catholic blogs
What Are Your Thoughts?leave a comment