I found myself this weekend in Central City, Pennsylvania, somewhere west of Harrisburg, in the diocese of Altoona-Johnstown, speaking on behalf of CNEWA. While there, I served and preached at a parish, Our Lady Queen of the Angels, with two worship sites—and one of the Masses was celebrated ad orientem.

The pastor is a dynamic young fireball by the name of Father Aron Maghsoudi—he’s the only priest in town and had to handle two churches and three Masses and did it all, somehow, without breaking a sweat.

He told me Saturday he had started doing one of the Masses ad orientem—giving his flock plenty of notice—and said the response had been positive for both himself and the people in the pews. “When you pray the Mass that way,” he told me Saturday night over dinner, “it brings people together in a way that is almost indescribable. You have all these people from different backgrounds and different ways of being Catholic, and suddenly it’s all focused in one direction, for one purpose.”

And I found that out myself Sunday morning.

“Is there anything special I need to know?,” I asked Fr. Aron. “I’ve never done Mass this way before.”

“It’s exactly the same,” he said, “just turned around.”

And I have to say: there was also something profoundly humbling about it. Just as Fr. Aron described it, all the energy in the church seems to go toward that moment, that action on the altar.  And all the action on the altar was directed there, in that time and space. There were no distractions, nothing to draw the eye away from the chalice and that sliver of bread. It was at once transcendent, but also intensely private.

There’s no other way to put this: it was beautiful.

For a more objective take, I asked my traveling companion and CNEWA colleague Phil Eubanks what he thought of it. Phil is a young Methodist from Tennessee and has seen his fair share of Catholic Masses over the years.  How did this strike him?, I wondered.

“I actually like it better,” he said after Mass. “That moment when the priest raises the host and the chalice is suddenly so much more powerful.”

It’s made all the more so, I think, because the bread and wine been more or less obscured from view during the Eucharistic Prayer. At the moment of consecration, suddenly the sacred species are revealed for what they are: Christ physically present before us.

It’s enough to bring us to our knees.

I have no way of gauging whether this subtle change in the liturgy has helped or hurt Mass attendance in Central City; I’ll have to ask Fr. Aron. But there were about 150 people in attendance. And it’s clear this form appeals to some people more than others. A few young people received communion kneeling, on the tongue. A couple women were wearing veils. I didn’t see that at any of the other Masses.

And, I have to say: any controversy about this form of worship strikes me as wildly overstated. Most of the Mass proceeds exactly as it is normally done today; the total amount of time the clergy spends with backs toward the congregation is less than 20 minutes—maybe a third of the Mass. (It actually reminded me a bit of the Divine Liturgy I experienced when I was in San Diego a few months back; there was a similar sense of mystery and intimacy and transcendence at the altar.)

I know this form of worship isn’t ideal in every setting—some modern churches just aren’t designed for it—but I found it uplifting and surprisingly moving.

I hope I get the opportunity to serve this way again—and to pray this way in the pews, as well.

Meantime, I have to note that church where this Mass was celebrated was like a shiny little jewel in the middle of coal country.  The altar was flanked by statues of two Slavic saints, Cyril and Methodius. And the atmosphere was simply lovely. I felt like I was attending church in another time. And: It connected me in a wonderful way to my ancestors. Many of the people in the region are Slovak, and descended from men who worked the mines. I mentioned in my homily how appropriate it was that the entrance hymn was “Faith of Our Fathers,” because I myself was speaking to them as the grandson of a Slovak coal miner from Pennsylvania, and trying in my own way to live out the faith he had brought with him from his home country.

Kudos to Fr. Aron for breathing new life in this great community and really, in his way, carrying forward the “Faith of Our Fathers.” I know Phil Eubanks and I loved his generous spirit and hospitality. And we loved, too, meeting the great people who make up this flock. I hope we get to visit there again. 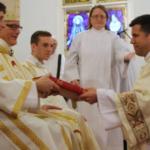 March 19, 2017 Score! Former sportscaster ordained a deacon on the way to the priesthood
Browse Our Archives
Follow Us!

Oh, Ye Lovers!
“The people of the city, young and old Were all lamenting, crying,...
view all Catholic blogs
Copyright 2008-2020, Patheos. All rights reserved.