George W. Bush on his mother’s death: ‘It’s the end of a beautiful life’

Even in the final days of her life, Barbara Bush retained the sharp tongue that belied her grandmotherly image. When her eldest son, former President George W. Bush, visited about 10 days before her death, the two playfully needled each other in the way they always did.

At one point, Mrs. Bush turned to her doctor. “You want to know why George W. is the way he is?” she asked.

The doctor looked a little surprised. “Because I drank and smoked when I was pregnant with him,” she said.

The former president told that story about his mother on Wednesday as he paid tribute to Mrs. Bush, who died at 92 on Tuesday at her home in Houston. Mrs. Bush, who had congestive heart failure and chronic obstructive pulmonary disease, decided earlier this week to decline further medical treatment intended to prolong her life and instead spent her last days saying goodbye to her family.

Former President George Bush, her husband of 73 years and the father of the younger Mr. Bush, was by her side when she passed away. Three of their children, Neil, Marvin and Dorothy, had been with her in the last few days, while George W. Bush and former Gov. Jeb Bush of Florida had visited recently and stayed in constant touch by telephone, according to a family spokesman.

The younger Mr. Bush said that he spoke with her by telephone shortly before her death to tell her he loved her, and she replied that she loved him too.

“It’s the end of a beautiful life,” Mr. Bush told Maria Bartiromo on Fox Business Network on Wednesday morning in his first interview following Mrs. Bush’s death. “She truly believes that there’s an afterlife, that she’ll be wonderfully received in the arms of a loving God and therefore did not fear death. And as a result of her soul being comforted on the deathbed, my soul is comforted.”

He appeared beside his wife, Laura Bush, who noted that she learned how to be first lady from her mother-in-law. “She was a great role model for me,” she said.

The former president said his two daughters — Barbara Bush, who was named for her grandmother, and Jenna Bush Hager — were dealing with the loss of Ganny, as they called her. “They’re emotional but as I explained to them, we ought to be joyful that we had such a wonderful woman in our lives and, two, that she passed with such strong beliefs. She truly was peaceful.” 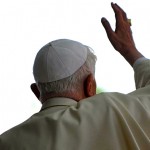 April 19, 2018 FIRST LOOK: Anthony Hopkins as Pope Benedict
Browse Our Archives
get the latest from
Catholic
Sign up for our newsletter
POPULAR AT PATHEOS Catholic
1