Tony, is that you? Reconstructing the face of St. Anthony of Padua

With the saint’s feast coming up soon, on June 13, I was surprised and intrigued to stumble on this post about Cicero Moraes, who has made a name for himself reconstructing the faces of saints from relics.

His most celebrated work, it turns out, is the reconstruction of the face of St. Anthony. Using computer software, skull fragments and a little imagination, Moraes creates remarkably lifelike and credible images of people who have been dead for centuries.

The brief video below shows how it was done.

As Moraes says in the Rome Reports profile:

Many times, people look at relics and don’t make the connection, but when there’s a face, the person stops to look at that image with more humanity. Many times, we also look at images that don’t match the real-life person.

Anthony was about 1.71 meters tall. [About 5 feet, 5 inches] His head was elongated so his face must have been straight and narrow, with a prominent chin, aquiline nose, large eyes and healthy, regular teeth. The upper half of his body wasn’t very strong, but it was well-proportioned, with long hands and tapering fingers; the lower half was more developed, due to continual walking. His knees showed evidence of long periods of time spent in prayer.

In 1995, the sculptor Roberto Cremesini had attempted a scientific reconstruction of the face of the Saint from his skull, but almost twenty years later, in 2014, a forensic reconstruction of his face was made, which has given us a high degree of objectivity on his facial features.

The operation was conducted by the Museum of Anthropology of the University of Padua with the fundamental contribution of “Centro Studi Antoniani” and of Cicero Moraes, a well known 3D designer specialised in facial reconstructions in archaeology and a collaborator of the Laboratory of Anthropology and Forensic Dentistry (FOUSP) of the University of Sao Paulo (Brazil).

The portrait that emerged deviated partially from the tradition of a thin, stretched faced, as is evident even in Cremesini’s bust. The portrait is closer to the more “massive and corpulent” fresco found in a wall along the presbytery of the Basilica of Saint Anthony.

June 5, 2018
Is this how Jesus died? Archeologists find rare remains of Roman crucifixion
Next Post 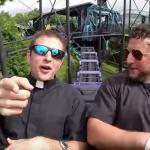 June 6, 2018 The journey of faith, I guess, has its ups and downs
Browse Our Archives
Related posts from The Deacon's Bench