Meet the man who would become Tennessee’s first Catholic governor

The Tennessean profiles today the two contenders for governor, with special attention to their respective religions.

Here’s what they have to say about Democrat Karl Dean:

If elected, Dean would become Tennessee’s first Catholic governor, according to state and Catholic historians. But Dean said he is running for the state’s top leadership post as the Democratic nominee and former mayor, not the Catholic candidate.

“Everybody approaches this issue in their own way,” said Dean, who was raised Lutheran but converted after marrying his Catholic wife. “What I get most from my faith is peace, and what I get from it is in many ways kind of private, and that’s the way I’ve chosen to live.”

While Dean does not seek out religious guidance on how to govern, he does understand after serving as a public defender and mayor of Nashville how important it is to consult and hear from religious leaders about community concerns. Clergy members are uniquely tuned in to their cities, he said.

“I think religion has a role in terms of government,” Dean said. “I obviously believe that we follow the law and there is a separation of church and state, but that has never been an oppressive thing in terms of me doing my job.”

Dean attends the Cathedral of the Incarnation. It is a Nashville parish as well as the church that serves as the official seat of the bishop for the Roman Catholic Diocese of Nashville.

The basilica-style church building with its red roof and yellow brick exterior is a draw for church-going tourists staying in the nearby hotels along West End Avenue as well as its parishioners.

On a Sunday morning in October, hundreds sat in the pews inside the 13th-century Italian Renaissance-style sanctuary for the 11 a.m. Mass. They made their way through the liturgical ritual, kneeling, standing, singing and praying in unison.

The Rev. Edward Steiner, pastor of the Cathedral, preached the homily following Scripture readings on divorce and the biblical origins of men and women. Dean is a lector at the church, but Steiner said he asked to be taken off the Cathedral’s list during the campaign so no one would assume he was reading Scriptures at Mass for political reasons.

Steiner described the former mayor as a faithful, church-going Catholic, who is supportive of the parish. At church, Dean is quiet, but approachable, and in public life, he does not parade his faith, Steiner said. But whether it was intentional or not, Steiner could hear threads of Catholic teachings in the speeches Dean gave as mayor.

“He doesn’t wear his religion on his sleeve,” Steiner said. “It’s clear as he enunciates a lot of his positions that those positions are truly informed by his faith.” 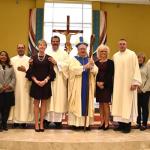 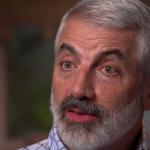 Blessed Are You When You Are Persecuted
"See, I am sending you out like sheep into the midst of...
view all Catholic blogs
Copyright 2008-2020, Patheos. All rights reserved.